I freely admit that I know almost nothing about Architecture. I have never designed so much as an extension, let alone a massive building or structure. I just know the sort of thing I like, so have carried out a little research in those areas. As I have mentioned before, I have a great admiration for the styles of Art Deco and Modernism. I also cannot disguise a fondness for the 1960s buildings, often described as ‘Brutalist’, along with some housing developments derided as ‘concrete canyons’. Of course, I don’t have to live in them, just admire them from outside.

As a diversion from the usual subjects featured here, I thought that I would discuss some buildings and houses, and attempt to explain why I like them so much. There will not be much Victorian Gothic featured, and you may notice a distinct absence of Edwardian Villas too. I will give some examples though, and if it is well-received, I may well post a follow-up, another time. I will try to only comment on those that I have actually seen, though the Internet, and the availability of images, make it possible to feature almost anything anywhere, I feel that the experience of looking at them can add something to the telling of the tale. They will mostly be in England, with some exceptions that I have admired in other countries too. I will also not restrict myself by sticking to dates or periods, and I will not feature them in any chronological order. The list will appear as it did in my head.

In the tradition of this blog, no photographs will appear. (Except for the Oyster Bungalow, that just popped up!) This will require the small task by the interested reader, of clicking on a link that will appear at the end of each section.

Senate House. (University of London)
Long before I had any idea what this building was, I was taken by its sheer presence, and the way it dominated the surrounding area in Bloomsbury. Completed in 1937, the Art Deco structure was a true skyscraper at the time. It was the second tallest building in the whole of London, overlooked only by the uppermost level of St Paul’s Cathedral. It reminded me of a medieval castle, the symmetrical rows of windows reminiscent of loopholes in an ancient fortification. Even today, it is still visible from most high points around the city, and its imposing stance has made it popular for use in many television and film productions.
http://en.wikipedia.org/wiki/Senate_House_%28University_of_London%29

Rowley Way, North London.
An experiment in communal living, The Alexandra Road Estate was opened by Camden Council, in 1978. Now commonly known as Rowley Way, this provided over 500 homes, a school, community centre, youth club, and even boasted its own heating system. Built in the style of a stepped pyramid (Ziggurat), the central area is pedestrianised for its entire length, as car parking is incorporated below the apartments. Despite backing on to a busy railway line, the main thoroughfare appears peaceful, and lots of planting gave it a garden feel. Opinion about the use of untreated concrete is still divided. This did not weather too well, and can make parts of the complex appear neglected. Social problems with some tenants also gave the estate a poor reputation, and many did not want to take up the offer of homes there. A stone’s throw from multi-million pound dwellings in St John’s Wood, one of the most desirable parts of London, the change in the law that allowed tenants to buy at a discount has changed the face of this development. To buy a three-bedroom apartment there today would cost a cool £500,000.
http://municipaldreams.wordpress.com/2013/06/18/the-alexandra-road-estate-camden-a-magical-moment-for-english-housing/

Oyster Bungalows.
The quieter seaside towns in southern England were often developed and expanded during the years between the wars. Pevensey Bay is probably best known for being the site where William the Conqueror landed in this country, before the decisive battle near Hastings, in 1066. The area is overshadowed by its proximity to the larger and more popular town of Eastbourne, so it never really expanded as a resort; though Pevensey Castle still attracts visitors. Built in the 1930s, hoping to capitalise on the popularity of seaside holidays, the Beachlands Estate is home to a collection of Modernist and Art Deco homes, all on a small scale. Included in this development are the famous Oyster Bungalows. I have never seen their like anywhere else. Small two-bedroom bungalows on tiny plots, each built in the shape of an oyster. The living area bulges outward, narrowing towards the back. They might actually be better described as Scallop Bungalows, as their shape more obviously resembles the shell of this animal. However, whether by accident, or design, they were called Oyster Bungalows, and they are delightful. 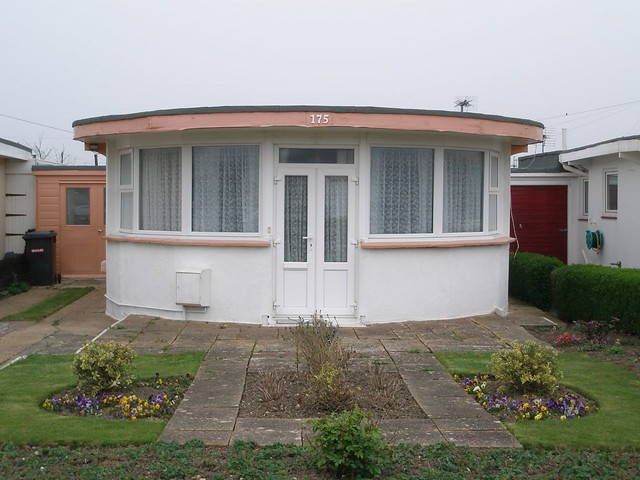 The Royal Crescent, Bath.
Just to show that I don’t only like 20th century architecture, feast your eyes on this 18th century marvel. Bath is a city that is so full of interesting buildings, it demands a visit. From the ancient Roman Baths, The Pump Room (made famous by Jane Austen), and the wonderful Pulteney bridge, with the shops built into it, the whole place is a touristic delight. The Royal Crescent, dating from 1775, is a sweeping terrace of houses in the Georgian style. These days, there is a museum at Number One, as well as a luxury hotel at Number 16. The whole row of houses is listed of course, and beautifully preserved. Essentially unchanged since the time it was built, this is a true look at architectural history that is still living and breathing today.
http://visitbath.co.uk/things-to-do/the-royal-crescent-p56191

Bodiam Castle, Sussex.
Back even further in time, to the 14th century, we find the exquisite moated castle of Bodiam. This is the embodiment of every castle I ever wanted to visit, or to live in. In a near-perfect setting, well-preserved in part, and also sympathetically restored, it is now owned and run by the National Trust. The imposing battlements have witnessed so many upheavals in our history, from the Wars of The Roses, to the English Civil War. On the losing side in that war, much of the castle was demolished, until later rebuilt to its original plan, in 1829. Despite its military appearance, the castle is not well-designed for war, and is more of a stylised ideal, than a practical fortress. Nonetheless, it is simply sublime.
http://en.wikipedia.org/wiki/Bodiam_Castle

St Basil’s Cathedral, Moscow.
Many churches of the Orthodox religion feature the distinctive ‘Onion’ dome in their design. However, there are few churches, or any buildings for that matter, as unusual and as easily recognised as St Basil’s in Red Square. Built during the 16th century, to commemorate the victories of Ivan the Terrible, it has nine domes, and two spires. The domes are coloured and patterned, with the effect that the whole building appears to be about to float into the sky, attached to a series of balloons. Since 1928, it has been a museum, owned by the Russian state. Illuminated at night, this iconic building is simply breathtaking, and remains as the instant connection with the city of Moscow, known the world over. (Click small icon to see a photo)

The De La Warr Pavilion.
For the last entry in this first post about architecture, it is back to England, and the 1930s. If I could choose to live anywhere, it would certainly be to own and live in this marvellous Modernist building in Bexhill, on the south coast of England. Inside as well as out, it typifies everything I adore and admire about this style and design. I could write a post about the staircase alone. The interior light, the feel of space, the flat roof terrace and outside balcony, all are just divine. Unfortunately it is not a house, and it is not for sale. It was built in 1935, to serve as an entertainment centre for this sedate seaside town. It houses a theatre, a gallery, and a popular restaurant, as well as exhibition rooms, and a gift shop. Since 1986, it has been listed as a Grade 1 building, so can never be altered. It will remain as it is, for as long as it stands. It is one of my favourite places, anywhere in the world.
http://en.wikipedia.org/wiki/De_La_Warr_Pavilion

So, there you have my first seven choices. I don’t for a moment expect everyone to agree with them. But please have a look at the links, if you don’t already know these places, and see what you think. Feel free to suggest your own preferences, and I will happily investigate them. I have plenty more for consideration, but seven is enough to be getting on with. If you like this idea for a series of posts, let me know. I will be happy to write more.