Towards the end of 2010, we had a chat about where to go to celebrate Julie’s birthday the following January. She wanted it to be somewhere that neither of us knew, so it would be a new experience for us together. As we could only spare a few days, anywhere long-haul was out of the question, so we investigated suitable city breaks around Europe. It was going to be her 50th, so it would have to be memorable, as well as somewhere that was easy to get around in, to avoid any travel stress.

I found an appropriately titled ‘Romantic Break’ at the Imperial Hotel in Prague. It included flights from London, bed and breakfast in a good class of room, and a three course dinner with drinks on one night. The hotel was centrally-located, and within walking distance of anything we wanted to see. As it was to be in January, we anticipated cold weather, and the possibility of snow. When the time arrived, it was unusually mild, and a look at the forecast for the area showed it would be about the same as London. The early morning flight from Heathrow meant that we wouldn’t be wasting the day travelling, and we arrived at the hotel in the afternoon, with time to explore. As expected, the weather was quite good. There had been snow the previous week, but little was left to interfere with walking around the city.

The hotel was in a good location, though proximity to the main station meant that we could hear a lot of train noises. We were also informed that the restaurant would be closed, due to problems with the flooring. However, breakfast would be available in the smaller cafe, and as we were supposed to have a meal included on the night of Julie’s birthday, they had booked us a table in one of the best restaurants, and would take us there by car. The walk into the old town took less than ten minutes. It was getting dark as we arrived, but it was everything we had hoped to see, and more. Despite the cold, and the fact that it was January, there were a great many tourists around. It seems that this city has no need of good weather to attract visitors. We made our way to the famous Astronomical Clock, with its unusual figures and clock face, and found a table at a bar opposite, to enjoy a glass of excellent Czech beer, as we watched the passers-by.

Please click on the photos to see the original large files. 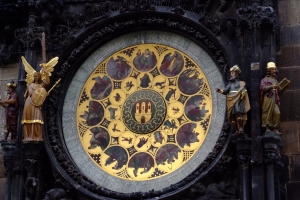 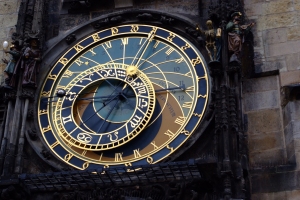 This amazing early fifteenth century clock is almost worth the trip alone. Carved figures, including a skeleton and the figure of Death strike the hours, and parade in and out of the clock each hour too. We wandered down to the imposing Charles Bridge at dusk, past attractive shops alongside those selling tourist trinkets. We were getting our bearings for the return trip in the daylight, and admired the swirling waters of the Vitava running fast underneath. Around this area of the Old Town, there were many restaurants to choose from, and we soon found one to eat in that evening. It was apparent from the menu that vegetarians are not that well-catered for, which was fine with us, as we enjoy our meat. We also tried the dumplings, a local speciality; very heavy, but delicious and filling. Just right for a cold evening. We headed back to the hotel, tired but excited. Even the squeaking noises of the trains didn’t stop us getting to sleep.

The next morning, we set out after breakfast, and headed off to see the Charles bridge in daylight. Along the river bank, we spotted the imposing modern architecture of the ‘Fred and Ginger’ building, called Dancing House, designed to look like the famous dancers, together in a tight hold. I liked this a lot, although it was more than a little incongruous alongside some of the older Baroque styles. Here’s a photo of it from Wikipedia.

Once on the bridge, we saw the various stalls set out, where souvenirs were for sale, as well as some very good photos and paintings displayed by artists. The water was high still, and rushing past, full of melted snow. The numerous statues were easier to make out in the daytime, and each one had its own story to tell. 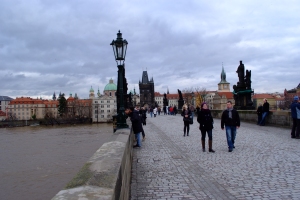 On the other side of the bridge, the feel of the city was very different. Small canals intersected the streets, and made the whole area feel more like a part of Holland or Belgium. 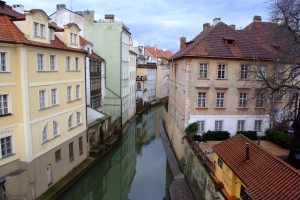 Heading back, we found Wenceslas Square, and stopped for coffee in the (once) Grand Hotel Europa, now a symbol of faded glory, with a tea-room unchanged since the time between the wars. http://www.pragueholiday.cz/evropa.php
After refreshments, we continued up to the statue that dominates one end of this famous square, that of St Wenceslas, dressed as a warrior, riding his horse. We couldn’t resist a peep into the branch of Marks and Spencer there, which was surprisingly similar to those here in the UK. It was then back to the hotel, to get ready to go out for dinner that evening.