This is a longer post, using seven photos to tell the story of my biggest walk to date. Please allow time for it to load on your computer. All photos are large files and can be clicked on for detail.

After the boat trip had been cancelled, we retraced our steps through the village of Glenridding, and set off in the direction of Helvellyn. This is the third highest peak in England, with a height of 950 metres, or 3,117 feet. Antony had told me that we would head for the ‘Hole In The Wall’ and Red Tarn, a lake inside the hill. Naturally, this all meant nothing to me, but gave me a mental target to aim for, as well as an eventual destination to achieve.

Antony and Ollie ahead of me on the start of the path, heading for Lanty’s Tarn, on the way up. They look as if they are popping down to the shops, and I am already struggling! The photo is blurred, as I took it as I was walking. I posted it anyway, as I wanted to show the type of path we were walking up.

As this was the highest I would ever have walked (from ground level) in my life, I could not help but keep looking at that distant top of the hill, wondering how I would ever manage even halfway. I was encouraged by the discovery of many other elderly walkers taking the same path, some considerably older than me. There was also the sunshine, lighting up the surrounding area behind us.

After walking for a relatively short time, I could sense that we had already started to climb quite high. I turned around to find this view of Ullswater, and realised that the effort was certainly going to be worth it. 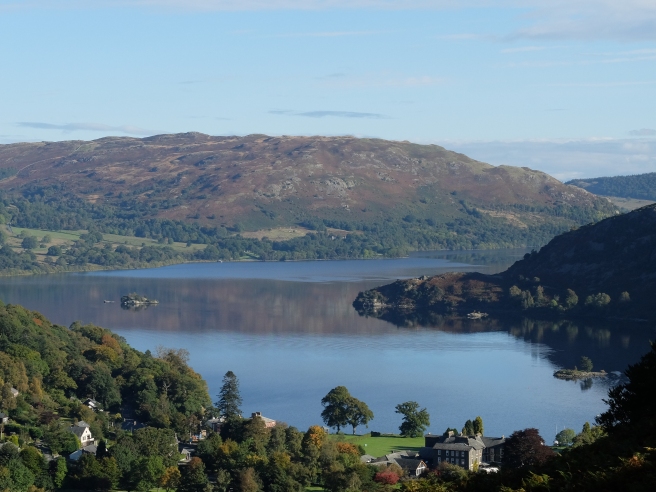 Over an hour later, and my thigh muscles were beginning to scream at me. The disadvantages of a short inside leg meant that I could not manage the stepping stones like a normal staircase. I had to step on and off each one, constantly lifting a leg to get onto the next. By now, I was also very hot, with the rucksack heating my back, and the inappropriate cotton T-shirt under my jacket was stuck to me. I then got one of my boots jammed between two stones. Trying to recover my footing, I fell backwards, arms and legs waving around like an overturned crab! Surviving both the small fall, and the greater embarrassment, I stopped for a rest and to drink some water. I saw how high we had come, and asked Antony how much longer we had to go. When he told me it was almost two hours more, to the wall that looked so close to us, I diverted my thoughts by taking this photo of a shaft of sunlight illuminating Grisedale Valley below. 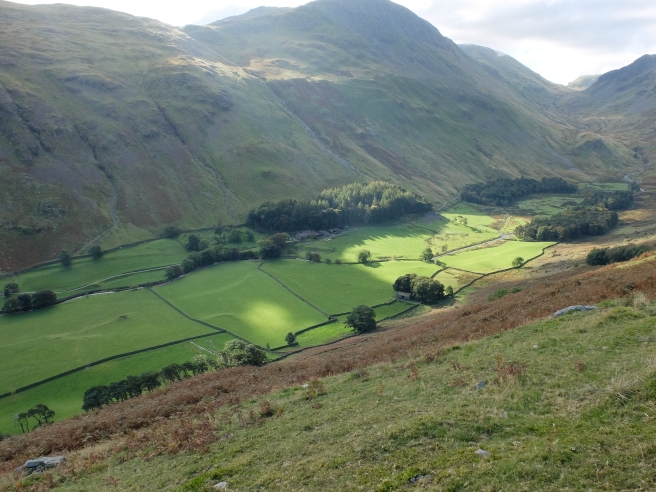 It is fair to say that the next 100 minutes were some of the longest of my life. Head down, I went from step to step, getting hotter and hotter as we continued to climb. My disappointment at my lack of stamina was not helped by standing to one side as other groups of walkers passed, offering cheery hellos as they casually sauntered up the hill. There were also some people running up to the summit. They are known as Fell Runners, and have levels of fitness that I cannot even imagine. When we reached the point we had been aiming for, I was suitably satisfied, and took this photo looking back the way we had come. Our starting point is right at the very bottom, in the small gap. 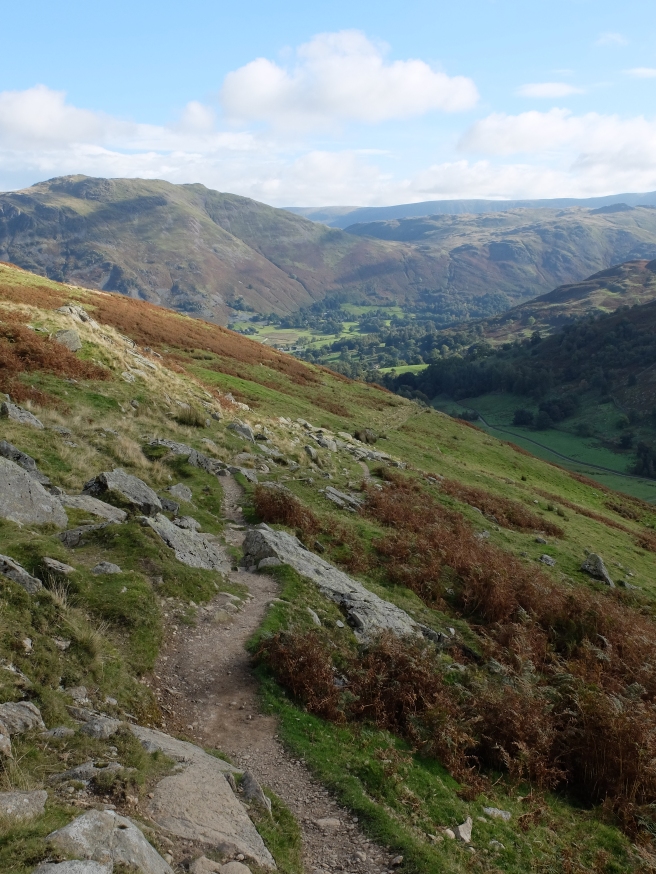 Approaching the Hole In The Wall, I asked Antony how high we had climbed. He told me it was just over 650 metres, or 2,133 feet. That was only two-thirds of the way to the top of Helvellyn, but was definitely my limit that day. Of course, there was no hole in the wall ahead. Instead of the promised hole was a short ladder, which we had to get over to continue to Red Tarn. That was easy enough, except for Ollie. He had to be lifted over, as the steps were too open for his paws. I took this shot of a totally relaxed Antony, on the hole that doesn’t exist! The summit visible behind the wall is Catstycam.

Luckily for me, it wasn’t too much further to the Red Tarn. This lake has formed in a deep hole caused by ancient volcanic eruptions, and gets its red association from the colour of ferric oxide that leaks into the lake from iron deposits in the hills. It was finally time for a proper rest. To eat our lunch, enjoy a well-earned coffee break, and get the heavy rucksack off my back. In the shadow of the peak, we lost the sunshine, and it was replaced by a cooling breeze. That was very welcome. You can see the clouds in the top left of this photo, indicating how high we were.

After a healing rest, we began the descent back to Glenridding. This followed the attractive hillside stream called Brothers Water, trickling down through the rocks into Ullswater in the distance. I took this shot into the light, looking back up to the peak of Helvellyn.

The descent wasn’t that much easier than the ascent, at least for me. Stepping down onto the large stones was jarring my hips like a car with no shock-absorbers! Luckily, the path levelled out later on, taking us past some disused mines and farms, until we approached the road once again, and the village sign for Glenridding. We drove back to Keswick via the circuitous Kirkstone Pass, taking in Ambleside and a glimpse of Rydal Water in a scenic route.

I was glad to have done this walk, and suitably satisfied that I didn’t just turn around and head back early. But I am in no hurry to do it again, any time soon!

37 thoughts on “Helvellyn: My vertical limit”