I was asked by Emma to participate in her Jeff Goldblum Blogathon.

Other reviews of films featuring Jeff can be found via links here.
Who’s Reviewing What? – The Jeff Goldblum Blogathon 2019 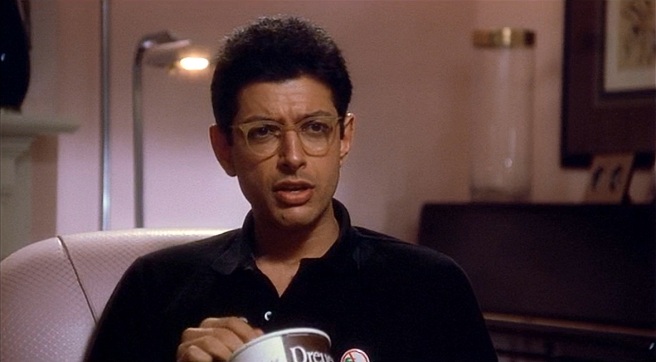 I have chosen the film ‘The Big Chill’, which impressed me a great deal, when I was 31 years old.

I was pretty much in the target market for this film about 30-somethings getting together for a reunion, after one of their best friends commits suicide. I was the right age, a fan of Woody Allen films, and the music on the soundtrack was right up my street too. And then there’s the cast. All at the beginnings of good careers back then, we get Kevin Kline, Jeff Goldblum, Tom Berenger, Glenn Close, Meg Tilly, and William Hurt. Plus a couple more I won’t bother to type out.

Direction by Lawrence Kasdan is always reliable, and he co-wrote the film too.

So with no plot spoilers, I won’t just tell the whole story, or even remark too much about the changes that the friends experience after meeting up following fifteen years apart. There are the expected flirtations, a lot of angst, and some home truths declared. In between some partying, and all that great music I mentioned too. Some critics didn’t like the fact that the film had little structure. There is no real middle, and certainly no comfortable ending. Nothing is nicely tied up, and viewers are left to make up their own minds about where the various members of the group might end up. I didn’t mind that, and considered that it presumed an intelligence in the viewer.

Always a plus point, for me.

For a review with no story , I am left with just two things then. The script, and the cast. The former is great. Crackling at times, never too sentimental, and with some snappy dialogue that has your head flicking between the protagonists, wondering what they will say next. As for the cast, they were carefully chosen, and it shows. A younger, bespectacled Jeff Goldblum impresses, as does an edgy Kevin Kline. Nobody feels ‘spare’, or added for effect, and they interact like people who really have been friends for a long time. That’s not something that is always easy to pull off, in an ensemble cast like this one.

We have to remember that this was released in 1983. Films like those were something of a flavour of the month back then, and perhaps these days would have more swearing, and maybe even a couple of random killings. This film is all about the words, and the emotions they convey. Jealousy, dissatisfaction, boredom, compromise, and perceived failure. And great music, don’t forget the music.

I don’t know about you, but I have had a few weekends like that…