When I was young, films were advertised by posters, shown outside cinemas. They would have some of the film showing that week, and usually one of the next ‘Coming attraction’. There was no film advertising on TV, and it was all but unknown in newspapers. No Internet, so no Social Media, and no other way of really alerting the public to what was going to be shown on our cinema screens. There were a few specialist film magazines, but they were both expensive on a low income, and hard to find everywhere.

The posters did their best to tell the story of the film, but mainly settled for visual impact, to attract audiences. There was an element of psychology in the images chosen to promote their films, as well as a good understanding of what would lead people into parting with their money to watch the latest releases.

This poster was for the 1932 horror film, ‘The Mummy’
The studio took the gamble of showing the film’s horrific ‘big reveal’ of the Mummy’s face, and made sure to headline Boris Karloff, the star.
It also showed a ‘damsel in distress’, to indicate that some eye candy was on offer too.

The Astaire-Rogers musical of 1937, ‘Shall We Dance’, took the option of showing the stars in a drawing, rather than a photograph.
They were so popular by then, an image of the couple was hardly necessary, so money was saved on using photographs. 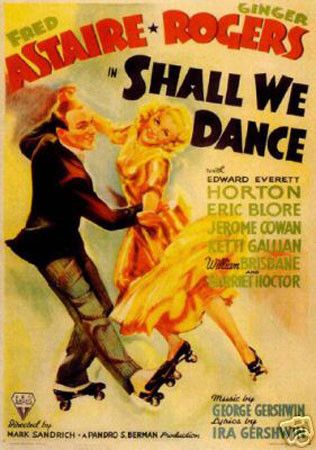 In 1939, the poster for the epic film of ‘Gone With The Wind’ showed the two stars, and gave some idea of the story’s setting too.
It also promoted the film technique, ‘Technicolor’, to show how modern the studio was.

For 1941’s ‘Citizen Kane’, the studio used a drawing, with Orson Welles looming large, but making sure to include two attractive women in the scene too.

The same year, Ida Lupino shared top billing with Humphrey Bogart, in ‘High Sierra’.
But she was ‘reduced’ on the poster, as Bogart was considered to be the star attraction to that film. 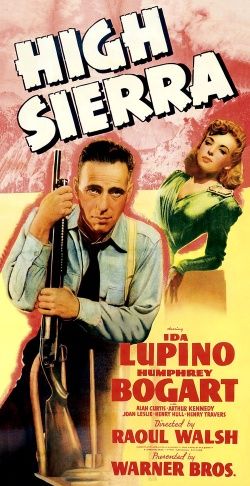 In 1944, during WW2, the poster for Hitchcock’s ‘Lifeboat’ portrayed the female stars as relying on strong men, who were protecting them as they drifted in the lifeboat.

For the Orson Welles’ film ‘Lady From Shanghai’ in 1947, they didn’t bother to try to explain the film.
A full view of the attractive star, Rita Hayworth, was considered to be enticing enough.

Ten years later, and a male heart-throb was definitely the draw, with Robert Taylor in ‘Ivanhoe’.
Despite the presence of the gorgeous Liz Taylor, her face appears very small on the poster.
Once again, ‘Tecnicolor’ was shown on the poster, this time in a much bigger font.

Just over a year later, and Liz was back. With ‘Cat On A Hot Tin Roof’, the film-makers knew what the audience would want to see on the poster.
Just Liz, in a seductive pose.

Modern film posters began to focus attention on the name of the director, often above the title or stars. As in ‘A Marin Scorsese Film…’, and they also featured the studio or film company more prominently, with headlines like ‘Universal Presents…’.

Do you remember the days of film posters? Perhaps you had a favourite, or one you have never forgotten.

Leave a Reply to By Hook Or By Book ~ Book Reviews, News, & Other Stuff Cancel reply