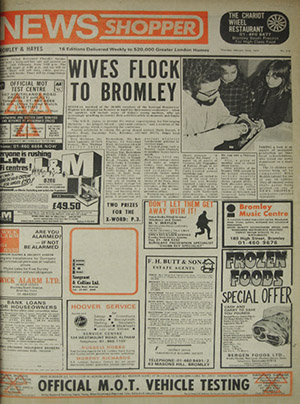 Last week, I had a conversation with one of my cousins. It turned out that he had never heard about my short-lived career as a junior reporter on a newspaper. When I woke up this morning, I was thinking about that for some reason, so thought I would tell you about it.

In 1970 at the age of 18, I was between jobs. I had a job, but also the promise of a better one to come soon. I was marking time until that second job gave me a start date. One day, I was idly flicking through the local ‘Free’ newspaper, and saw an advertisement for a reporter required, to work on that very paper. Immediately, visions of Jimmy Olsen (look him up) flashed into my mind. I knew I could write, and felt sure that this could be the start of a wonderful career as a respected investigative journalist.

I arranged an interview, and got the job. With still no start date for my promised job in a record company, I resigned from my office job, and started as a ‘newspaperman’ two weeks later. The News Shopper Group has a series of titles, and covers the Kent commuter belt, as well as most boroughs of South-East London. I was to be based at the Orpington office. Although that wasn’t too far from where I lived with my parents, it was an awkward journey by public transport. Besides, I had got the job on the understanding that I had access to a car. I had a car, so I drove there.

I have to confess that I was actually carrying a tan raincoat. I was convinced that no self-respecting reporter would cover a story without wearing one. I had also bought some new notebooks, and three ballpoint pens. I was excited to know what my first reporting assignment would be, and rather deflated to be told that I would be on the front desk, taking classified advertisements from members of the public who came in and paid cash.

My first ever task as a junior reporter was to accept an advertisement from someone who had some baby lop-eared rabbits for sale.

The day went by fast, as it was actually very busy on that desk. Cars for sale, Lonely Hearts, tradesmen advertising services, even a young woman selling her wedding dress after her fiance had jilted her at the altar. (She was crying throughout the transaction, and I gave her my clean handkerchief. I never saw that again.) Pleased with myself, I got ready to head home, when the Deputy Editor came down, and asked me to talk to him in his tiny office.

“What are you doing with all these classifieds, Pete? You are supposed to ‘sell-up’. Get them to use more words, suggest bold type, tell them a box will get much more attention. And those trade ads? Tell them we can add a graphic, like a paint brush for painters and decorators. All the stuff you took today won’t even cover the cost of setting and printing”. It hadn’t occurred to me that talking people out of their cash was part of my job. I had helped write some of the small-ads, but never thought to try to double the cost of them by suggesting all the expensive extras. And nobody had shown me what to do. But I didn’t mention that.

The man shook his head. “I have a different job for you tomorrow, come and see me when you get in”.

The next day, I was told that I would now be ‘Zodiac’. The ‘Your Stars’ was one of the most popular sections of the newspaper, as people liked to get their predictions for the week ahead. I told him that I hadn’t a clue about astrology, and went on to add that it was meaningless anyway, as there were thirteen signs of the zodiac at one time, until they were trimmed to a more manageable twelve.

He laughed. “Don’t concern yourself with any of that, just use this box”. He produced a very long file box, containing cards in sections marked by tabs. “This is how it works. Go back six months on the date tabs. Whatever was that weeks prediction for Pisces now becomes this weeks for Capricorn, and so on. Take out the prediction card, get them in the right star-sign order, and lay them out ready for the typesetter”. I was incredulous. All those people basing their lives and aspirations on a few lines from a newspaper zodiac had no idea that a few months ago, that same prediction was for someone born under a completely different sign.

As I left carrying the box, he called out behind me. “And check if there’s a full moon on the calendar. If there is, mix them up a bit, and add a few lines about how the moon will be affecting their mood”. I turned and asked him, “Won’t they catch on that everyone is supposedly affected by the moon?” Without looking up, he replied, “They only read their own sign. Nobody cares about someone else’s sign”. I spent the rest of my first week between being ‘Zodiac’, and helping out at the front desk trying to ‘sell-up’ advertisements with little success.

The following Monday, I was beyond excitement to receive the news that I had to go out and cover some stories. The first one was to interview an elderly lollipop lady (crossing guard) who was retiring after 20 years in the job. I drove over to the arranged place to find a perky 80 year-old dressed in her uniform, clutching her sign on a pole. She was accompanied by the head teacher of the school that she worked outside of, and her own daughter, who was as proud as punch of her Mum. I wrote down the lady’s story, making sure to also take the ages of everyone there, and their full names.

Back at the office, I was thrilled to be sitting in the reporter’s room, alongside the other two reporters based there. Using an ancient manual typewriter, I wrote up that mundane story as if it was a report about the D-Day landings. When I corrected the typos and read it back, I had to admit I had exceeded even my own expectations. The sub-editor laughed all the way through as he read it. Using a thick red pencil, he deleted over two-thirds of my text, and corrected some spacing and capitalisation. When he was finished, he handed it back. “This can go through. Get the boy to take it for typesetting, and make sure the picture editor approves any photos”.

I stopped dead in my tracks. “Photos? There are no photos. There wasn’t a photographer there, and I don’t own a camera”. Shaking his head, he reached out for the sheet of paper, and when I handed it over, he impaled it on a metal spike. “You should have booked a photographer. What use is a local-interest story like that without a photo of the old girl and her lollipop?” I was red-faced. Nobody had told me to book a photographer. They had just presumed I would know that.

My next potential ‘scoop’ was booked for the next morning. I had to travel into South-East London to interview a war veteran. He was dying of cancer, and whilst at hospital receiving treatment, someone had stolen his treasured medals. I was told that I didn’t need a photographer, as the interviewee had his own photos of himself wearing the medals, and was happy for us to use them.

But the next morning, my car wouldn’t start.

At the time, my Dad was in hospital, having an operation to rectify a slipped disc on his spine. Parked outside our house was his brand new company car, which he had only got a couple of weeks earlier, before he went in for surgery. Desperate to get a story in the paper, I took the keys from a hook inside the house, and drove his new car to my appointment. Before I got to the address, I got a little lost in the maze of unfamiliar streets in that district. Checking my paper map book, I found where I needed to go, and accelerated across a junction without noticing a STOP sign. A car driving fast along the road with right of way hit my Dad’s car so hard, it literally ripped the front section off it. That car slewed across the road, and went through the front wall of someone’s garden opposite.

By any estimation, it was a bad accident.

The other driver was trapped, unable to get out of his car. I had a very painful shoulder, but was otherwise uninjured. The police arrived, the fire brigade arrived, and then an ambulance arrived to deal with the other driver. A couple of people who had been waiting to cross the road gave statements about what they had seen, and I was also asked to explain why I had driven across a stop sign into the path of an oncoming car. As I had no idea what to say, the policeman reported me for ‘Driving without due care and attention’. When he discovered that the car belonged to my Dad’s company, he also reported me for not having insurance to drive it. “You will have to go to court”, he told me with a smile.

I found a phone box, and rang the newspaper. When I told the deputy editor what had happened, he wasn’t sympathetic. “So no story, and now you don’t have a car. Don’t bother to come in tomorrow, I will send your cards in the post”.

As I walked to a bus stop to work out how I was going to get home, I had to reflect that my career as a newspaperman had lasted less than seven days.

82 thoughts on “Thinking Aloud On a Sunday”