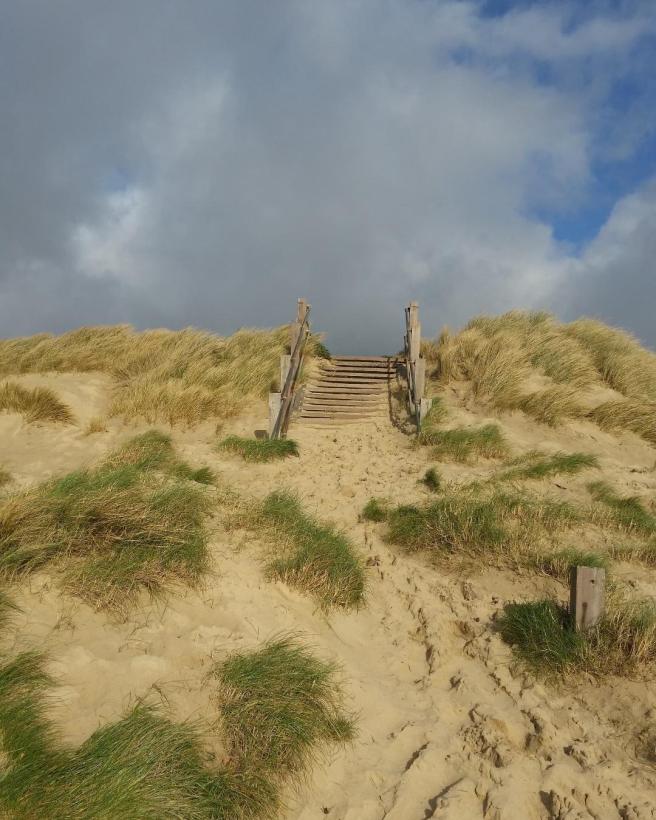 This is a short story, in 1120 words.
It was prompted by the above photo, sent to me by Janet Gogerty.
https://tidalscribe.wordpress.com/about/

It wasn’t often that their annual week away went so well. There hadn’t even been much traffic on the long drive down. And instead of wondering what they were going to do when it was raining, they had enjoyed the hottest summer since records began.

The owners liked to call it a holiday camp, but it was just forty large caravans in a field, with a camp shop, and a social club open in the evenings. The big attraction for them was that it was next to one of the largest and most beautiful beaches in the country. All you had to do was walk to the end of the site, and go down some steps. Once through the sand dunes, it spread out as far as the eye could see.

“Better than abroad”, Steve said. He said that every year.

The main thing was that they could afford it, and Steve and Julie didn’t care if they went to the same place every year, on the first week of the school summer holidays.

Julie looked around her, the happy smile had been on her face all week. Jane was lying on a towel, looking bored. Her big bug-eye sunglasses were all the rage, even if they looked stupid. She had been listening to her Walkman all week, which considering she only had three cassettes, was good going. But thirteen was an awkward age. Julie remembered how that felt. Just about.

Sally was chasing Steve with a crab shell she had found, and he was pretending to be terrified. He was a good Dad, and Sally was a Daddy’s girl. Six years old, and thought she was already grown up. Times were changing, and Julie wished her kids would stay kids for as long as possible.

She had promised the girls an ice cream sundae in that place along the main road. But it was such a lovely afternoon, she decided to wait a bit longer before packing up their stuff. Last day tomorrow, so make the most of the time left. She stretched out, feeling the warm sand under the towel, and Steve came back to sprawl out beside her. Sally tried to scare Jane with the crab shell, but she waved her hand away, still trying to behave with that cool attitude that she never managed to carry off. Leaning back, Jane looked up at the sun.

This really had been the perfect holiday.

Steve had been resting his head in her lap, and it was him turning over that woke Julie up. They couldn’t have been asleep very long, she thought. It was still bright sunshine, and very hot.

Jane was still listening to music with her headphones on, so Julie reached over and lifted them off her daughter’s head. “Where’s Sally?” The girl jerked a thumb, indicating the dunes. “Back there, playing near the steps”.

She wasn’t by the steps though.

Julie was up in a flash, spraying hot dry sand over Steve. Instinct told her something was wrong. Very wrong. Terribly wrong. She started running toward the steps, shouting her young daughter’s name “SALLY! SALLY!”

Her Dad ran straight into the sea, splashing past startled bathers as he also bellowed Sally’s name. Jane was sitting up now, and had taken her headphones off. She cupped her hands around her mouth, to amplify her voice. “Dad! Dad! She wasn’t in the water. She was near the steps”. His legs pumping like pistons, her Dad ran back past her, sand stuck to his feet in clumps, and his trunks saturated and dripping water.

When she heard the screams, it didn’t even occur to her that it was her Mum making that noise. She stood up and turned to look, seeing Mum at the top of the steps clutching one small red rubber beach shoe. It was the same as the ones that Sally had been wearing.

Everyone was very good, they had to admit that. The site manager phoned the police, and organised a search of all the caravans. Steve was still running along the coast when the police arrived. It was only a small seaside town, but they sent everyone they had, and called for more. The lifeboat crew launched too, searching right over into the small coves around the headland. A friendly policewoman tied to reassure Julie. “This happens all the time, love. I’m sure she will show up soon. Probably just walked off somewhere. Do you have a photo of her? A recent one?”

She wanted to scream at her, ask who would bring a recent photo on holiday. But then she remembered Steve’s Kodak, and handed it to her. “There will be some in here”.

It was almost sunset when her husband got back. His feet were in a shocking state, covered in dirt and blood. Julie looked at him and shook her head. She was still clutching the small red shoe.

Glaring at Jane, he walked over and grabbed her shoulders, starting to shake her without saying a word. The girl burst into tears, and Julie put her arm between them. “No, Steve. Leave it”.

The manager let them stay on for a few days, no charge. They put Sally’s photo on the front page of the local newspaper, and it was even shown on the evening news. Steve had hardly spoken since, and was out from before first light until it got dark. He must have walked every single inch of that coast, as far as the eye could see.

Over a hundred people had helped in the search. The police brought in dogs from around the county, and the air force supplied a helicopter from the search and rescue base. Julie knew they would have to go home eventually. They had telephoned both of their jobs, and received sympathy and understanding. They would have to go back to work, or the money would run out. Julie thought about staying there on her own, just in case Sally came back looking for her. But they both knew they couldn’t afford it.

None of them said a word on the way home.

A different company owned the site now. The metal caravans had been replaced by smart lodges. They had televisions, and nice decking areas to sit on. She came back every year, and on the same week too. At first, it had been the three of them. But Jane was married now, and the cancer had taken Steve almost four years ago. Not even bothering to unpack, Julie made the familiar walk across the site to where those same steps still led to the beach.

Then she sat on the top step, holding the red shoe.