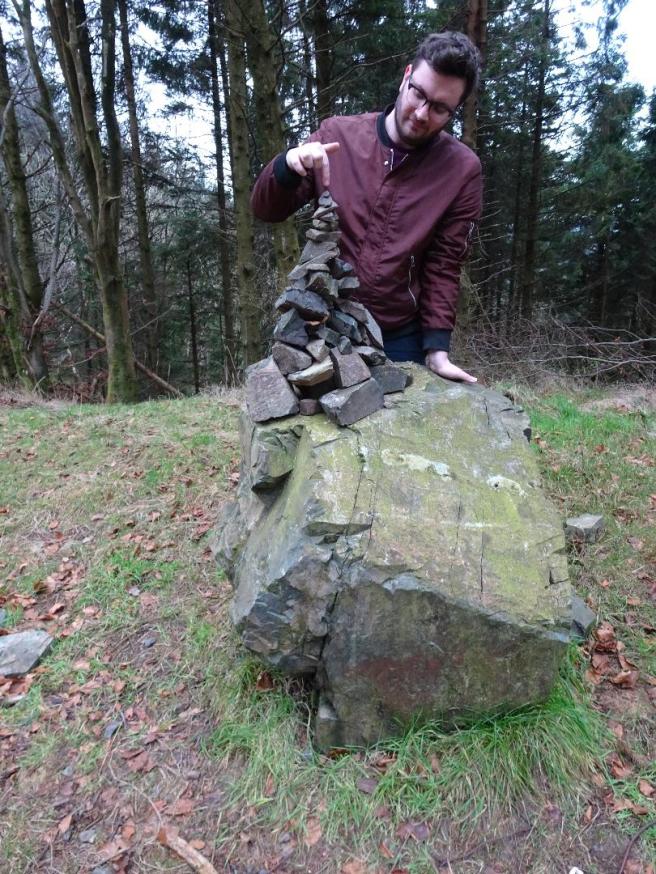 This is a short story, in 1200 words.
It was prompted by the above photo, one of two sent to me by Mary Smith.
https://marysmithsplace.wordpress.com/

Kieron smiled at his grandchildren as they sat expectantly on the floor in front of the armchair. It had become a tradition over the Christmas period, that old story. Even now they were older, they still wanted to hear it before bedtime. Despite their hologram video games, and a television the size of one living-room wall, it was apparent that there was nothing they liked more than to be told a story.

When he was sure they had settled, he began.

“It was fifty years ago, maybe more. I can’t remember now if it was back in 2018, or the following year. My best friend at university was Dougal Stewart, and to celebrate getting our degrees, we planned a camping trip to the Galloway Forest Park, so we could visit Cairn Avel. Now you have to know that this is a place of great mystery, once important to the ancient people who lived there. Standing stones can be found in the area, but at one time, Cairn Avel was perhaps the most important site of its kind in Europe.

But nobody knows for sure, as it is so old, its history has been lost, and become legend. Maybe kings were buried there? Or the bones of those who died carried great distances to be placed inside. There were certainly religious ceremonies of some kind occurring there, as it had been built into a huge structure at one time. We had heard that the place had a feel about it. If you stayed long enough, it was as if you could sense the goings-on and the spirits of those people from a time before history as we know it”.

He sat back, and sipped his single malt. At least they hadn’t started to synthesise that.

“So, we put our camping gear into Dougal’s old car, and off we went to the camp site. On the way, my friend scoffed at the legends. He was a practical person, and only believed in what he could see before his eyes. He intended to make his own observations at Cairn Avel, and had brought along a new camera, some measuring devices, and his notebook”.

As Kieron paused, he watched the children turn to smile at each other. They had heard about cameras and notebooks, and Alec had seen a camera in a museum. But it always amused them, to hear that part.

Once we had set up the tent ready for sleeping in later, we drove straight to the cairn. It wasn’t far, and at that time of the year, there was nobody else there. I walked around, hoping to sense those ancient folk, and trying to walk in their footsteps. Much of the cairn had gone by then of course, the stones used for building, by later generations. But the pile of stones built into a small tower in the middle caught Dougal’s attention, and he set up his tripod to take lots of photos of it. Then he made some measurements, trying to get some idea just how big it would have been in its day”.

Little Kirsty leaned forward. “Can we see the photo, granddaddy?” Her brother Alec turned to her. “Shush now, Kirsty. That comes later”.

With a smile, the old man continued.

“Well, it was dark by the time we got back. There was just time to heat up some tins of baked beans for dinner, and then we crawled into our sleeping bags, tired after a long day. I woke up when it was still dark though, sure I could hear something scraping against the side of the tent. As I tried to get back to sleep, I imagined it was the angry skeletons of the spirits we had disturbed at the cairn. They were coming to warn me not to mess around on their burial site, I was sure. But I didn’t tell Dougal the next day. Although I should have.

He wanted to go back to the cairn the next morning, but I suggested exploring the woods near the camp site first. After walking uphill through some small pines, we came across a clearing. There was a big old rock right in the centre of it. That reminded me of an altar, maybe a place where ancient rituals happened. Probably even human sacrifice”. The children’s eyes were wide, and their mouths open. “I imagined some poor wretch being dragged to that huge stone, and a circle of people watching as their throat was cut, or their head chopped off”. Kirsty screwed up her eyes, trying to picture that scene.

“Anyway, Dougal started to walk around, picking up small stones. I had no idea what he wanted them for, but when I saw what he had started to do, it became clear. He was stacking them carefully on top of each other, on the flat part of the big central stone. He was making a replica of Cairn Avel, I was sure. As he did that, I felt unusually cold, and the sky began to cloud over. I wanted to tell my friend to stop, but I knew it would have sounded silly to him if I told him why. The wind in the tree branches was making a strange rattling noise. I knew it was the rattling of those ancient bones. When he had finished, I took a photo of him on my phone”.

Turning to his right, Kieron reached for a large photo in a battered old frame. He held it with both hands, and turned it to face the children. “See, here he is, his finger is on top of the pile of stones, in case it fell down before I took the photo”. Kirsty put her hand up, as is he was in school. “But did it fall down after, granddaddy?” He smiled, realising she had obviously forgotten the answer to that question. “That’s the funny thing, Kirsty. It didn’t fall. When he took his finger off, it should have fallen, but it stayed just like that, rock solid”.

Finishing his nightcap in one gulp, Kieron continued to the climax of his tale.

“I told Dougal that I thought it was weird that the stones didn’t fall, but he just laughed and carried on walking. I gave the pile a little push with my hand, but it stayed firm. That gave me the creeps, I can tell you. That evening, we drove down to Castle Douglas, to have fish and chips in Moore’s. We agreed they were the best we had ever eaten. Back in the tent that night, I had trouble sleeping. I was expecting to hear the scraping of bones on the side again. Dougal was sound asleep in no time though.

When I woke up the next morning, he wasn’t in the tent. And he has never been seen again since that day!”

Moira came into the room. ” I hope you have finished, Daddy? It’s their bedtime now”. They stood up and kissed Kieron goodnight, thanking him for the story. Alone in the room, he was lost in thought.

One of these days, he would tell them that story was true.

(If you would like to visit Cairn Avel, you can. It is a real place.)

37 thoughts on “Photo Prompt Story: The Legend Of Cairn Avel”