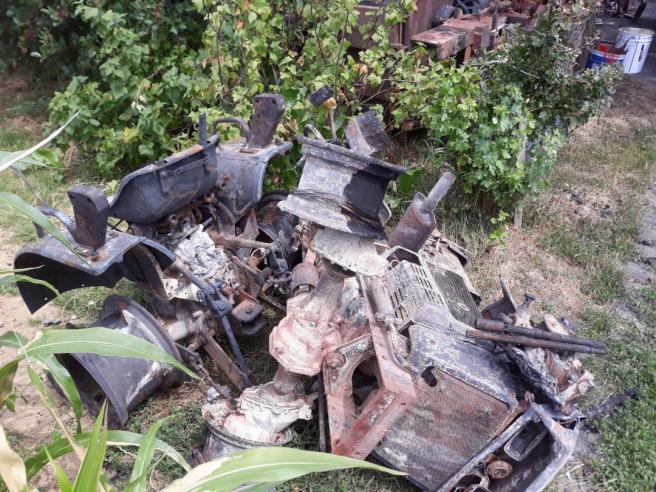 This is a short story, in 1260 words.
It was prompted by the above photo, sent to me by Eddy Winko.
(Not his real name.)
https://winkos.wordpress.com/about/

Ned was a bad-tempered man, a farmer who hated farming. But he had waited over forty years to inherit the farm, and even though it was less than four hundred acres, he was determined to make a go of it. The land was suited for potatoes, and that’s what his family had always grown. So Ned grew potatoes, and had a contract with a small supermarket that brought in a decent income.

He was a mean man too, keeping a close eye on all the expenditure, and only employing the cheapest labour at harvest times. He liked to use foreigners, and would house them in shabby old caravans, even charging them rent, deducted from their pitiful wages. Rosie often wondered why she had married him. It wasn’t that he was attractive, and definitely not for his pleasant nature, as he didn’t have one. But her family had been poor, and they had seen Ned Reece as a good catch for her.

What followed was a hard life as a farmer’s wife. Expected to be up before first light to make breakfast, then housework until lunchtime, before some small jobs around the property to fill the afternoon. Even when Tim had come along, she had been expected to manage with no help, exhausted trying to cope with a baby and little sleep. After dinner, Ned would usually be in the old barn until late, tinkering with his tractors.

Although he wasn’t a romantic or passionate man, Ned did have one real passion. He loved tractors. Refusing to get any new ones, he worked on the same ones that had been in the family since he was a boy. And more than that, he bought other old ones, mostly wrecks, until he had at least ten of the things filling that old barn. He wouldn’t allow her to buy new shoes for their son unless he had inspected the old ones first, but thought nothing of spending most of their spare income on fixing up those piles of junk.

There was a favourite tractor too. Ned called it ‘Old Red’. It was a Russian tractor of all things, and when it was running, it made a noise like iron bars falling down a long metal staircase. He had managed to import it from Poland, paying as much to have it brought over in a container as the purchase price. Then he struggled to get parts for it, telephoning people all over Europe to find them. Rosie knew better than to complain about the money being spent on the tractors and phone calls.

She had fallen foul of Ned’s temper more than once. And so had Tim.

It took Ned almost three years to finish that tractor, to get it ready for work on the farm. He painted it with three coats of bright red paint, and even painted the tyres with some black gloss he found. As he started it up, it made lots of popping sounds, and let out some loud bangs like a shotgun firing, before Ned started to drive it around the farm yard with a stupid grin on his face.

Her husband also presumed that Tim would follow in his footsteps. The Reece Farm would continue, and remain in the family for all time. One evening at the dinner table, he pointed his fork at young Tim. “People will always eat potatoes, Tim. Don’t forget that. You will always have a living, growing potatoes. And there’s the land, don’t forget that. A man who owns land will always be someone. Tell you what son, how about I take you for a ride on Old Red tomorrow afternoon? I will show you how to drive it, get you started young”.

Tim didn’t reply. When his Dad said things like that, it was never a question, just an instruction. Rosie felt for her son. He had no interest in machines or farming. He was artistic. Even when he was very young, he liked to draw. He would draw anything, from Esme the farm cat, to the piles of old tractor wheels going rusty outside of the barn. Now he was older, he had a painting set. Some oil paints, brushes, and a few boards. Rosie had begged them off her auntie, as a Christmas gift for Tim.

He said it was Tim’s fault. After telling his son he had to try to drive the thing, the tractor had stalled. Ned had pushed Tim off the seat, and he had fallen hard enough to cut his leg open. As she was cleaning the cut ready to bandage it up, her husband came into the house with his face red, and his mood foul. “It’s going to take me hours to strip that down and get it going again now”. He changed into his workshop overalls and stormed out, slamming the door.

Rosie was amazed when Tim showed her the painting. He had done it up in his room, without letting on. Hiding it under the bed each day, until it was finished. She stood back to admire the large wooden board. It was Old Red, painted in a field, with Ned driving it, and smiling. “I did it for Dad. I still feel bad about breaking his tractor last year”. All that time had passed, and Tim had been carrying that guilt, even though Ned had managed to get it started in less than two hours. She felt her eyes misting over. “He will love that, Tim. It’s so good. I can make out every detail, including Dad’s work jacket with the rip in it”. She propped it up on the window ledge above the sink. Ned would see it when he went to wash his hands before dinner.

When Ned didn’t even mention the painting, Tim’s face fell. Rosie decided to introduce it into conversation over dinner. “What did you think of Tim’s lovely painting of you driving Old Red, love?” Pulling at a lamb shank with his teeth, Ned turned to the boy, mumbling through the meat. “If you want to paint something, then you can go into the barn and give that old Fordson a couple of coats of dark green. The tin of paint is next to it”.

They finished the meal in silence.

It was the middle of the night when they heard the booming sound. Ned turned over in bed, then sat up. “Did you hear that, Rosie?” He put his slippers on, and went out onto the landing. Tim was standing there in his pyjamas, rubbing his eyes. Ned was down the stairs in a flash, flinging open the front door.

The barn was ablaze. Not just a small fire, it had consumed the whole building, smoke rising up into the night sky. As they watched from the bedroom window, Rosie and Tim could hear the explosions as the fuel tanks blew up, and the numerous cans of paint and petrol burst into flame. She heard Ned on the phone in the hallway. “That’s right, The Reece farm. Send lots of fire engines, you will see the flames. Hurry!”

They could see him running around the barn, looking like a demented chicken. He couldn’t get close enough to do anything about it, even though he had grabbed the hose from the yard, and was pointlessly spraying water in the general direction of the building.

As she wrapped her arm around her son’s shoulder, he looked up and smiled at her.

She gave him a wink, and they both started laughing.