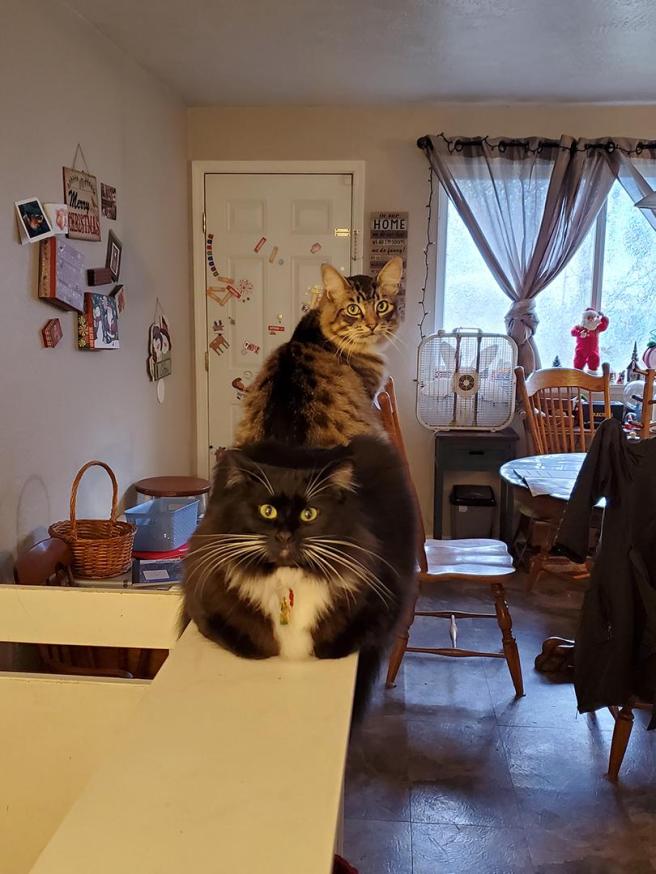 This is a short story, in 1420 words.
It was prompted by a photo sent to me by Ed Westen.
https://deartedandjody.wordpress.com/about/

Vince Monroe should never have been allowed near animals. From an early age, it was plain to see that there was something bad about the kid. He was just plain nasty, wrong in the head.

He started young, even before school age. Squashing bugs in the garden for no reason, pulling wings off of butterflies, and throwing stones at the birds as they landed on the feeder in the garden. If Duncan and Vera ever noticed, they didn’t stop him. But they probably didn’t notice, as they adored the boy. He had come late to Vera, just when she had given up on the idea of ever being able to conceive. For her, Vincent was a blessing, a golden child.

Everyone else knew better.

Choosing to spoil him, to never deprive him, that just made things worse. He made no little friends at school, and nobody ever wanted to come for sleepovers, or to accompany Vince and his parents on trips to the Zoo, or the Soft Play. Although he was just six years old, everyone knew. Everyone except Duncan and Vera that is.

When the class rabbit had to be cared for over the Christmas break, Vera was the first to volunteer. Bugalugs was loved by all the kids, and Miss Hargreaves was a little concerned about letting it go to the Monroes. But she could hardly tell the woman that she thought her kid was creepy and scary.

They let Vince have the rabbit’s cage in his bedroom, like he asked. It smelled a bit, but he was insistent that didn’t bother him. The second night it was there, they were woken up by the smoke alarm screeching. Rushing into their son’s room, they found him sitting on his bed in fits of uncontrollable laughter. The rabbit was screaming terribly, its fur was on fire. Duncan got a bowl of water and threw it over the poor thing. Turning to his son, he gave him a look of disbelief. Next to the cage was an old tin of barbecue lighting fluid. He must have taken it from the shed.

Bugalugs was still breathing, so Vera wrapped it in a towel, and took it back to bed with her. She spoke sternly to her husband. “I’ll take it to the Vet tomorrow, and say it was an accident. Don’t you go saying anything to anyone, Duncan”.

The Vet took one look at the badly burned and semi-conscious bunny, and immediately said he had to put it to sleep. Vera concocted a story that they had been having a barbecue in the garden, and the rabbit had been running around on the grass. Something had spilled on it, and it caught alight. The Vet looked at her with the same expression Duncan had when he looked at Vince. “A barbecue? In December?” She told him that if they wanted to barbecue steaks that was their business. Then she paid the bill and left.

Miss Hargreaves didn’t believe her either. But she accepted Vera’s offer to buy a replacement rabbit, on the understanding that they could never take a pet home again.

Less than a year later, Mr Tudman from number sixteen knocked on the door. He asked if they had seen Monty, his big black cat. Vera made sympathetic noises and kept the door almost closed as she assured him she hadn’t seen anything of Monty. As she was talking, Duncan was in their back garden, burying a black cat he had found nailed to the fence.

Two years later, it was decided to get him his own pet. Vera was sure that if he had one of his own, he would learn about animals, and treat it better. It wasn’t one of their best decisions. Vince called the Bull Terrier pup Bingo, for reasons known only to himself. At first, he seemed to love the dog. He played with it after school, and it slept on his bed. One Sunday afternoon, he asked to take it for a walk around the block, on his own. Vera didn’t like him being out on his own, but she was sure the dog would protect him from strangers. Duncan smiled at that. “It’s the strangers who need protecting from our Vince”. His wife wasn’t amused, so he laughed at his own joke.

Bingo returned with terrible wounds around his neck. Vince said he got himself tangled up in some barbed wire, chasing after a squirrel. Duncan had to take him to the out-of-hours emergency Vet, and pay a small fortune to have the cuts cleaned and stitched. Bingo was wary of Vince after that, and didn’t sleep on his bed any more. If he saw Vince getting close, he would give a low, menacing growl. After three weeks of that, they decided to take the dog to an animal shelter, to find it another home.

Vince didn’t care. And he got no other pets.

For his eighteenth birthday, Vince wanted a motorcycle. He told them which one he liked, the most powerful one he could legally ride on his learner licence. It cost a lot, but Vera dipped into her savings and bought it. She got him all the safety gear too, and the best crash helmet money could buy. Her boy had to be safe on the road.

His first long trip was to go and visit Aunt Mildred, who they called Aunty Mill. She was Vera’s aunt, and had never married. The old lady hadn’t seen much of Vince growing up, and took the handsome young man at face value, making a fuss of him. She introduced him to her two feline companions, Mrs Fluffytail, called Phoebe for short, and Mr Big Whiskers, known as Boss. The cats were large, a bit overweight, and treated like a prince and princess. They could go anywhere they liked, sit anywhere they chose, and she fed them chicken fillets like they were regular people.

Vince pretended to like them, but they seemed to know, slinking away from his touch. When Aunt Mill was making lunch, Vince went out into the garden for a look around. His Mum had told him to keep in with the old lady. “You never know, she might leave you her house, and all her money. We are the only relatives she has left”.

Mr Big Whiskers was sitting on the patio, licking his paws, and Mrs Fluffytail was hiding under some bushes, watching the birds on the fence. It was too much for Vince to resist. Boss got a well-aimed sideways kick, delivered with both force and accuracy. It sent the cat flying through the air, and when it landed, it scampered up the fence at lightning speed, disappearing into the neighbour’s garden.

An old flower pot was the missile of choice for Phoebe, smacking onto her large head with a satisfying crack. Vince tried to stifle his laughter as the cat cleared the back gate in seconds.

After lunch, Vince was so bored, he decided to leave early. He thanked the old lady profusely, and said all the things his Mum had told him to make sure to say. He gave the house one last glance as he rode off on his motorbike. If he ever inherited it, he would sell the dump the same day.

Taking the main road route, he accelerated to the roundabout at the maximum speed he could get out of the small engine. The driver of the petrol tanker told the police he didn’t even see the motorbike coming, just felt the bump as it wedged underneath his truck. They all agreed it was lucky there hadn’t been an explosion, considering he had a full load on board.

But nothing could be done for the young man squashed flat in the wreckage.

When Vince woke up, he felt funny. Everything seemed too big. He could see a clock on a wall. It looked familiar, but it was much too big. He was stood next to a bag of rice, but the bag was as big as a house. He closed his eyes and waited. It must be a dream. He would wake up soon. When he opened his eyes, Mrs Fluffytail and Mr Big Whiskers were right in front of him, just inches away. they were both as big as buses, and their eyes looked like bright saucers.

Then he heard Aunt Mill’s voice, loud and shrill. So loud, it seemed she must be using an amplifier.

“Boss! Phoebe! Get that mouse! Kill it!”