Here is her own short bio.

Hello, I am Megha. I come from India and I’ve been living in the Netherlands since last four years. I am 31 – not too old, energetic and optimistic. Reading, writing and Travelling are my top three likes. So far, I’ve travelled across 23 countries and I aim to reach the 50 mark by the time I am 35 years old. By profession, I am risk Consultant but by heart I am a writer. I’ve been writing (old style) since last seven years but have only published a blog this year. My blog (link at the bottom) is my collection of experiences and opinions about life & things & places & people.
In this post, I share my experience of visiting Auschwitz. Even if you haven’t heard of Auschwitz, I’m sure you would see it (& know it), through my eyes as you read this. 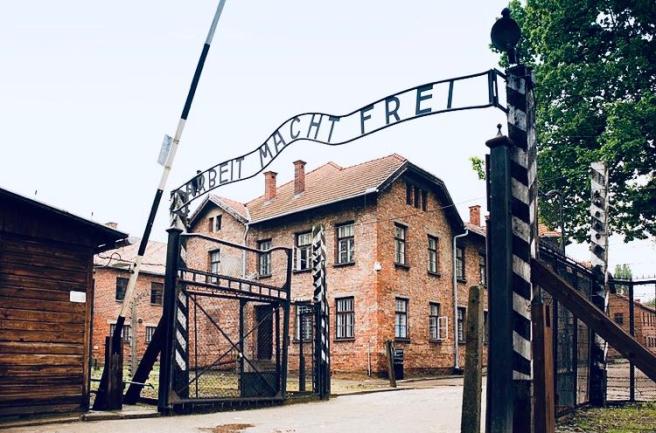 If you haven’t heard of Auschwitz, Imagine a slaughter house (not for animals, but for humans). Imagine a place where millions of Jews were confined for years, tortured to death by hard labour, thirst, extreme hunger and suffocation. The reason for death being- neither Crime nor War but the belief in a superior race. Imagine how humans could be responsible for more than a million deaths in a place this small. (in the name of saving humanity from other humans – Jews). Auschwitz is not old history but very much a part of recent century. Nazi Germany master minded this extermination camp (and many others) during world war ii with the sole aim of systematically eradicating the race of Jews.
So last year, when I planned my visit to Auschwitz, it was not unusual for people to ask why I would choose to go there? Wouldn’t it be depressing? In my defence, not visiting this place, merely excuses us from reality, hoping we forget it someday. There is No history book that can convey the happenings of this place to a degree that it instils your memory.
Somewhere inside Auschwitz, I found this quote that sums up the reason why people need to see this place.

I cannot deny the fact that this place is downright melancholy. You would be standing in the site of holocaust witnessing Exhibits of the dead (millions) piled on top of one another. It has a room full of belongings that were stripped off from the inmates before they entered the camp. A room full of gas canisters that were used to suffocate them to death. A room full of human hair that were shaved off from their dead bodies before being burned by the Nazis.
A guide will take you around the camp and tell you how a typical day looked like for these prisoners. You will see the laboratory that was used to experiment on prisoners, inducing them with deadly diseases. You will see the kitchen that has some paintings that the prisoners drew to keep themselves hopeful. You will also see the punishment cells, gas chambers, the shooting wall and a room fitted with body sized ovens. If this does not melt your heart, a thousand photo frames mounted in a large corridor showing the victims, their age and survival span in the camp, definitely would.
By the end of this visit, you are loaded emotionally. Some cry, some hold back tears. Some ponder how humans could be capable of this act. How could some still hope to live in this situation. How strong were the people who survived the camp? Does the trauma impact their free lives later on?
This wasn’t over for me yet. I was feeling restless. A visit to Auschwitz raised some very fundamental questions about human nature, survival and our relative mental strengths. I slept on these questions for days following. Later, I learned about an Auschwitz survivor, a psychologist – Viktor Frankl. Viktor was one of the fortunate ones to have survived this place. He says, “Those who have a ‘why’ to live, can bear with almost any how “. For Viktor, the why was a hope to finish his book about logotherapy. He wrote this book after he was released from the camp. What was supposed to be psychology theory, turned out to be a truly personal account of his survival in Auschwitz detailing how the camp impacted the inmates psychologically, why some survived while others didn’t.

His book “Man’s search for meaning” was published in 1946 and became an instant bestseller. I read it a month after my visit and regard this as a closure to my quest for Auschwitz.
P.S – The photo at the top, shows the gate of Auschwitz inscripted as ARBEIT MACHT FREI” meaning work makes you free.
Paradoxically, It was death that made these inmates free.

Here is a link to Megha’s blog.
https://myhandwrites.com/

Please visit her blog to see what else she is writing about, and welcome this new blogger to our great community.