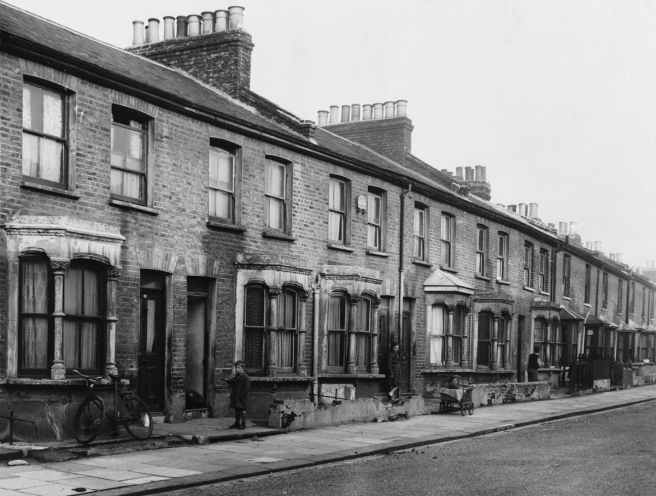 This is the twenty-third part of a fiction serial, in 767 words.

As the year dragged on, it started to get dark earlier, which meant the bombers came more often. It was now more dangerous for Elsie and Vera to walk home from work in the dark, and a few times when the sirens sounded, they went to London Bridge Station instead, and took shelter in the underground station. Vera started to feel hungry too. They still ate in the canteen for lunch, but the food was less satisfying, and the portions smaller. Elsie did her best at home, trying to make a lot of vegetables tastier by adding gravy or some herbs from pots in the garden. They ate more bread too, when they could get it, and used up a lot of their stockpile of jam.

Janet was feeling stressed. Her dad had received a card from the Red Cross telling them that Les was in a camp in Germany, near the border with Czechoslovakia. That meant there was no point trying to escape, as it was too far to travel to any coast to try to get home. At least they could now send him letters and parcels through the Red Cross, so Vera wrote him three letters with all the news, and included two pairs of socks and a knitted scarf in her small parcel. She knew it would get very cold in Germany that coming winter. As well as the worrying news about her brother, Janet got some better news. Frank had finished his training, and had some leave.

Vera didn’t accept an invitation to meet up with them both, as she thought it best to let them have the short time together. At work the next Monday, Janet told her that Frank was being sent abroad. There was nothing official, but they had been issued with shorts, and the tanks had all been painted in light colours. Frank told her it didn’t take a genius to work out that they were probably going to Egypt. He had also been issued with sleeve patches for the 7th Armoured Division, which meant he would probably be fighting Italians. That seemed to calm Janet down. “Frank says the Italians aren’t up to much, so it might not take long to beat them”. When Vera asked if she had enjoyed seeing him, Janet blushed. “What do you think? Course I did”.

The next time Viv came round, she had news of her boys. There had a been a letter from a a nice lady called Mrs Davies. The boys were living with her and her husband in a place called Llangurig. He was a sheep farmer, and the boys loved their two dogs, and going out on the tractor. She said they were good boys, and slept together in her son’s bed in the attic. He was away serving with the Fusiliers, and was nearly thirty. The three women sat around trying to imagine George and Eddie running around some hills in Wales with two sheepdogs, and what they would make of big herds of sheep. Viv started to get tearful, so Elsie grabbed her hand. “Think of all that roast lamb and mutton they get to eat, love. With mint sauce too, I bet!” Viv told them she had sent the lady a nice letter thanking her, and a parcel with a toy plane and some picture books for the boys.

There was also news about Roy. he was not getting leave, as the Commandos had something on, and he couldn’t say what it was. When Albert came home and they told him, he thought for a moment. “Bet it will be Norway. The boys will be up to something in Norway, I’m sure”.

In November there were reports of a terrible bombing raid on Coventry. The radio said the city had been almost totally destroyed, and nine hundred people had been killed. Albert showed them the photos in the newspaper, and Elsie looked pale. He was furious. “No need for that. Those Jerries are going to get it now, mark my words. They have started something, and we will bloody well finish it. Bastards!” Vera had never heard her dad swear like that, or seen him so angry. This war was changing everything, she thought to herself.

After Coventry, things calmed down a bit in London, as the Germans started on Bristol, Birmingham, and other cities around the country. Vera actually got to sleep in her own bed once again, and wasn’t woken up by the sirens. Despite the cold in her bedroom, she stretched out and wiggled her toes under the sheets and blankets.