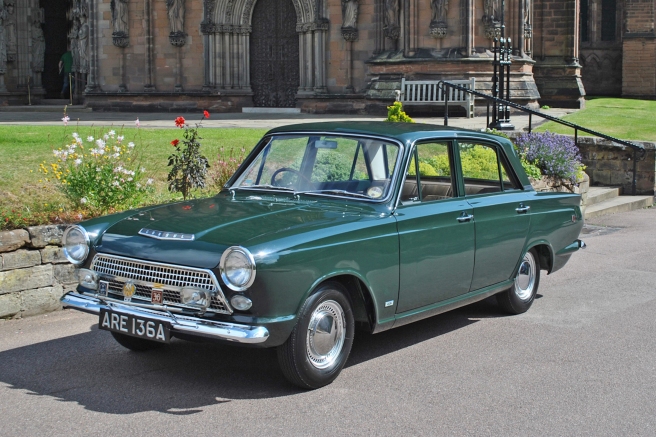 This is the twenty-third part of a fiction serial, in 804 words.

There were two officers this time, Edgar noticed, and one of them was female. “Is this about the car again?” The male policeman didn’t answer the question. “Could we come inside please, sir. Is your wife at home by any chance?”

Edgar and Milly listened to them without interruption, too shocked to take in the enormity of what they were saying. When he realised they had stopped talking, Edgar thought he had better say something. “An accident, you say? Probably a fall from a height with fatal injuries? Are they sure it is Adrian?” The policeman wondered how to phrase his reply.

“All we can say is that they have found the body of a young man in a lake. Inside his jacket pocket was the passport of Adrian Edgar Lexham. There was also a wallet in the inside pocket containing a driving licence in the same name, and around seven pounds in French Francs. His clothes appear to be British, by the labels. This is a French police enquiry, and technically unrelated to your son’s car, though we made that connection of course. It is suspected that someone stole his car from where he fell, and drove it to Geneva, but that was probably after he had fallen, and the car found by chance with the keys inside. I regret to tell you that someone has to travel to France and make a formal identification”.

Milly Lexham finally broke down, and began to sob. The young policewoman did her best to comfort her, and suggested going through to the kitchen and making some tea.

Thinking for a moment, Edgar made a decision. “My brother will drive me there, and then we can continue on to Geneva and collect Adrian’s car. I’m sure it is him, unless someone stole his wallet and passport. But to be honest that is unlikely, he was most careful about such things. Please write down all the details for me, and we will get a ferry tomorrow from Dover”.

When the police officers had left, and Milly was lying down on the bed after taking two aspirins, Edgar rang his younger brother. “Malcolm, I have to ask a favour. Adrian has died in France, an accident of some sort. I have to go there and arrange for his body to be returned, then collect his car from Geneva. Can you pick me up in the morning and drive me down to Dover to get a ferry? It’s going to take a couple of days, I’m afraid”. He knew his brother would help, and have no trouble getting time off. He owned his own haulage company, and could leave the manager in charge.

They had to drive to Macon, a larger town where Adrian’s body had been taken after it had been examined, and was now stored in the mortuary of a small hospital there. It was a drive of over six hours from Calais, so the brothers stopped the night in a hotel and went to see the police the next morning.

The identity confirmation was witnessed by a chubby policeman who spoke no English. Fortunately, they had found a doctor who spoke English well, and he told Edgar he had to sign some documents, and then the body could be released for transport back to England. Edgar thanked the doctor. “Please tell the police officer I will arrange this with a funeral director in England, and have my son collected as soon as possible”.

Back at the hotel to collect their things and check out, Malcolm phoned his manager in England, instructing him to contact Fayers in Kings Lynn. That undertaker could arrange to bring Adrian home. When he had the manager repeat everything back to him, Malcolm seemed happy that it would be done right. “Tell Fayers to send me their bill, I will sort it out with my brother later”.

They drove to Geneva, arriving at lunchtime, and finding a hotel. As they ate lunch, Malcolm looked across the table at his brother. Edgar had been unusually calm throughout, and was dealing with it all as if it happened every day. “Ed, why don’t we relax this afternoon and sort the car out tomorrow? It’s a Seven hour drive to Calais, then we have to wait for a ferry spot. One more day in the car pound won’t make any difference”.

After paying more charges, and having trouble making themselves understood at the car pound, they finally walked up to the car just after eleven the next morning. Malcom whistled, and shook his head. “Why are you even bothering to take this home, Ed? It’s hardly worth what it’s already cost in fines and fees, and now you have to drive it hundreds of miles”. His brother shrugged.

“Because it’s all we have left of him, I suppose”.