This morning, three men arrived to work on the driveway and frontage of the house. The old gravel had ceased to combat the weeds, and it was looking unloved and overgrown out there. Although the space is not large, there is room to park four cars when necessary, so far too big for me to tackle it. I had hit one side of the five-bar gate with my car, so that needed a new gate post.

The old shrubs had to go too. The climbing hydrangea on the house was encroaching into the brickwork and guttering, and the unkown type (to me) of other bush seemed to only serve as a ladder for spiders to get in through one of the spare bedroom windows. Under the front Oak tree, the raised bed had been invaded by brambles, the dwarf conifer had started to grow out instead of up, and I had let everything get into something of a shambolic state.

Using a company recommended by our next-door neighbour, it was arranged they would come today with a digger and sort out everything, replacing the sharp gravel around the front of the house with the kinder, more rounded version.

Exactly at at 8:30 as promised, the digger was unloaded from a trailer, and they set to with a vengeance. It is only two and a half hours later as I type this, and they have already removed the shrubs and plants, tidied the raised bed, and scraped away all the old gravel and dirt. One of them is preparing to replace the broken gate post, and another is sweeping and clearing away everything not needed.

10:45, and the clearance is complete. The old gatepost has been removed, and they are preparing the cement for the new one.

Just after midday, I took Ollie out for his walk. The prepared ground had been sprayed to keep down any weeds that grow back, and one of the men has taken the tipper truck to collect the gravel from Fakenham.

When I got back just before two, the gate was fixed and solid, and they were adjusting the fittings so that it cleared the deeper new gravel. Two-thirds of that new gravel had already been laid and levelled, and they were just waiting for the next load to come back in the tipper truck. The owner of the company told me that they will only be here for another thirty minutes once the last gravel is laid.

I had other estimates for this work. One man wanted half the money up front, the other told me it would take two to three days, and the final price would depend on how long it took to complete. Both said I would have to have a skip for the debris, and pay for that separately. This man told me he would finish it in one day, and remove everything included in the price.

14:30, work completed. Six hours after they started, including a short break for lunch.
Here is what it looks like. (There is no ‘before photo’ as I was too embarrassed to show it!

(The photos are Flickr links, and can be enlarged there by clicking on them.) 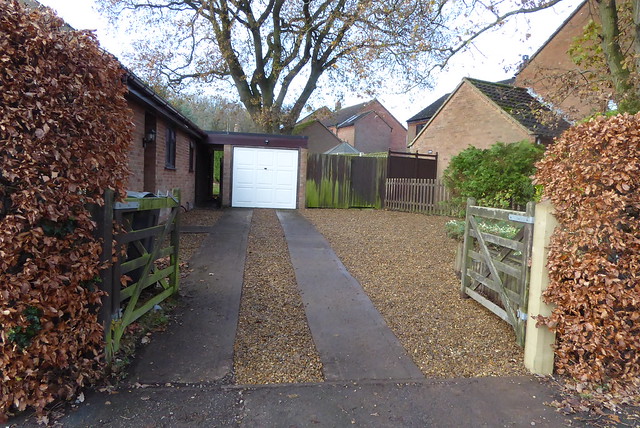 The huge Oak tree in this photo is the one in our back garden. 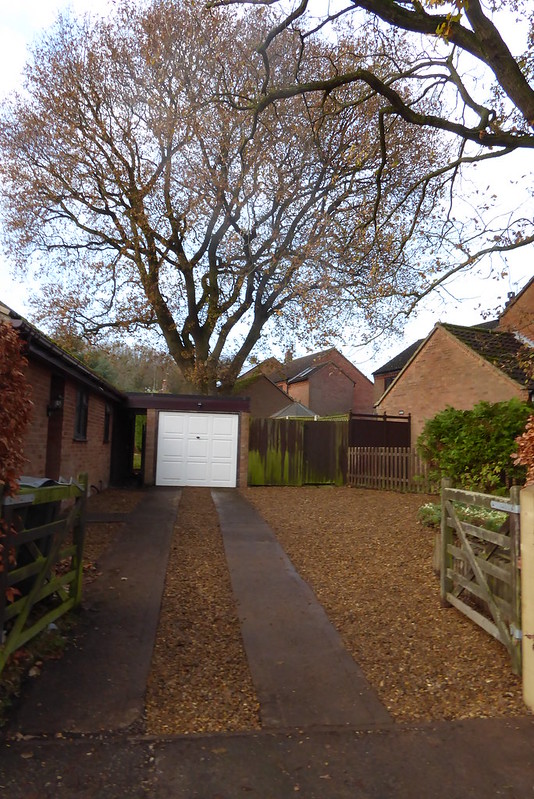 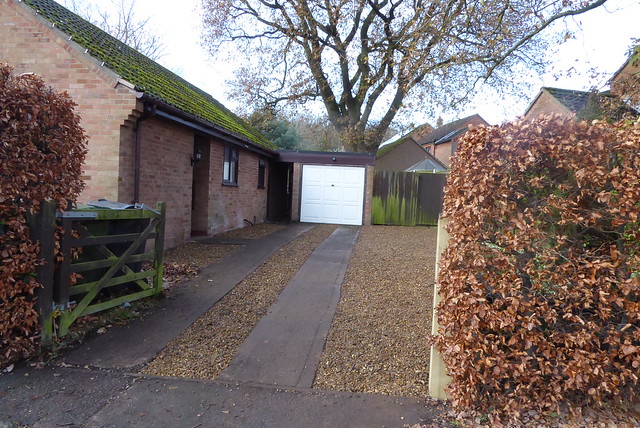 We didn’t even have to pay today, as we will get a bill by email next week. That’s what I call great service!

90 thoughts on “A Refurbished Frontage”