My thanks to Jude from https://cornwallincolours.blog/ (and other blogs) for sending me this photo as a short story prompt. This is a belated entry from 2020, as I saved some photos at the time. 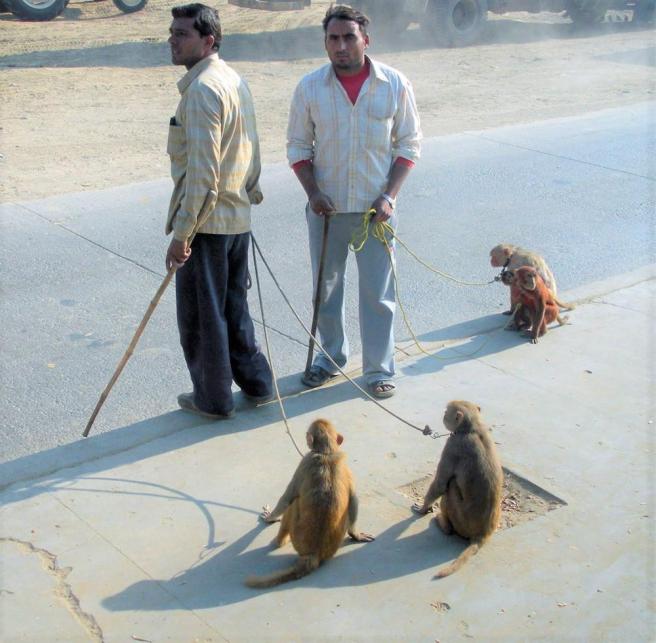 The men waited by the square where the buses arrived. Big buses, minibuses, small jeeps, taxis, any vehicle that could cram in some paying customers. They looked for arriving families with children, the easiest targets.

Children liked the monkeys, and wanted their photos taken with them. After a long, dusty journey the parents were usually happy to please the fractious infants. And if there were Nanis or Dadis, those grandparents were usually happy to part with a few rupees to let the monkeys sit on the shoulders of their little ones, even if they had no phone or camera to capture the moment.

Rudra was always there at weekends. He hated those two men because he saw what they did before the buses arrived. They beat the excitable monkeys with sticks, denied them food and water, and only gave them enough to survive, as long as they didn’t upset any paying customers by screeching or biting. He thought those men should have a real job.

They could mend shoes, just as his father did, or wash clothes, like his mother. That had sent Rudra to school, and he had learned how to read. He had also discovered the ways of the world at a young age.

The world was cruel.

Sometimes, the two men beat the monkeys so badly that they could no longer walk, or sit on the shoulders of customers. He wanted to do something, but first he had to grow strong, and to try to save some money. He knew where the men slept after they had eaten, keeping the monkeys on tight ropes close to them. One day he would act, but that day was a long time coming.

Just after his tenth birthday he had enough strength, and enough rupees saved from odd jobs.

Sneaking out of the house was easy enough. Mother and father were tired after a long day at work, and as soon as dinner was eaten, they were sleeping on their mats. He had to act quickly though, taking the small sharp knife from under the cooking pot and treading the well-used path to the back of the market where the buses and taxis stopped.

There was a good chance that the men had been drinking, as he had seen them doing that at dusk. They slept under a large plastic sheet at the side of the road behind the wall, the monkeys held on ropes tied around their feet. He wasn’t used to being out in the dark. It felt scary, and there were no buses in the market place. After so many years, Rudra felt strong and determined. This was his one chance.

Sure enough, the men were snoring, and probably drunk. The monkeys chattered as he approached, but they were also tired. It was easy to cut the ropes close to the men’s feet without disturbing their slumbers. As he led the monkeys away, Rupra was hoping that he could find a motor rickshaw still plying for hire in the town. He had to wake up the driver, who was sleeping on the back seat. The man waved him away at first, but his eyes were brighter when he was shown the rupees.

Climbing into the back with the monkeys, Rudra told him to take him as far away as the money would last. As the driver set off, the boy stared into the darkness. Once out of the town, fields stretched out on both sides of the dusty road. It was some time before trees could be seen up ahead, and the rickshaw stopped. The driver said his money had got him this far, but no further.

As he led the monkeys toward the trees, he looked back into the darkness. The rickshaw was turning in the road, heading back to town. Inside the cover of the trees, it was so dark he could hardly see to slip the ropes from each monkey’s neck in turn. At first they just stood by him, reluctant to leave his side. Then there was a loud noise from deeper inside the forest, and one of the monkeys scampered up the nearest tree. It was soon followed by the other three, and Rudra could hear them climbing higher. Once they were in the highest branches, he turned and headed for home.

The walk was tiring, but he got back before dawn. And he was grateful for the long, straight road that guided him back into town. Slipping off his sandals, he tiptoed in and carefully replaced the knife under the cooking pot. Sleep came soon once he was lying quietly on the mat, and he dreamed of monkeys enjoying freedom in the trees.

After breakfast, Rudra was keen to run to the market place. He wanted to see the disappointment of the awful men when they had no monkeys to tempt people arriving. The smile on his face was so wide, he felt his mouth stretching. But as he looked over the wall, that smile disappeared.

There were the men, holding their sticks. And they had four different monkeys, ropes tied around their necks. They were calling to the people getting off of the buses, and prodding the monkeys to make them jump around. The boy turned and sat with his back against the wall, not wanting to see any more. Tears formed, and trickled down his cheeks.

The world was cruel.

35 thoughts on “Photo Prompt Story: Rudra And The Monkeys”