These photos are from a book by Michael Hiley. They show Victorian women in their working clothes. We owe many of these fascinating photos, sketches, and detailed descriptions of Victorian working women to Arthur Munby, who interviewed many, and collected their photographs as well as their stories.

Housemaids, early 1860’s. They are dressed in their best for the photographer, but look at their hands. From Victorian Working Women.

London Milkwomen in 1864 and 1872. From Victorian Working Women.

Women mine workers in trousers at Wigan, 1860s. From Victorian Working Women.

Yorkshire girls collecting limpets and other fishbait; 1860. From Victorian Working Women. Their skirts and petticoats appear to be tucked up into their belts in back.

Arthur Munby standing beside Ellen Grounds, a “pit wench” at Wigan. 1866. Right, a photo of Ellen Grounds in her “Sunday best.” Munby stood next to Ellen in this photograph to show how tall she was. 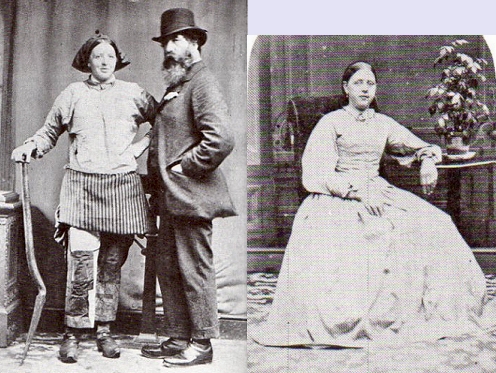 The story of Arthur Munby, barrister, Cambridge M.A., civil servant, diarist, poet, friend of many other writers and of the Pre-Raphaelite artists, popular in high society, and obsessed with Victorian working women, is almost incredible. Utterly middle-class, but not wealthy enough to cut loose from the conventions of society, Munby fell in love with a “maid of all work” — about the lowest form of domestic servant — named Hannah Cullwick. They were both in their twenties. After a chaste courtship of almost twenty years, they married in 1873, but — as much by her wish as by his — she continued to pretend to be his servant.
Hannah Cullwick, maid of all work; at right, Hannah “in her dirt.” from Victorian Working Women. She was strong enough to lift her husband off the ground and carry him around. He liked it.