I woke up today thinking about Litter. Not just any average, everyday litter, but the mountains of rubbish (garbage) left behind recently in some beauty spots and city centres. Adding to the blatant disregard of public safety by not social distancing, the thoughtless morons who participated in the sun-seeking events or football celebrations also thought themselves to be above clearing up their own litter.

After almost 500,000 ignorant visitors descended on Bournemouth beach, they left behind them some 70 metric tonnes of rubbish. This included a great deal of plastic which might have been washed into the sea, as well as numerous cans and glass bottles posing a hazard to people and wildlife.

Someone also took this short video of the spoiled beach, early the next morning.

Liverpool Football Club celebrated winning the Premier League championship for the first time in thirty years. Against the advice of the city authorities, and the club itself, tens of thousands of hysterical fans took to the streets of the city to celebrate. Not only did they show complete disregard for social distancing, they managed to start a fire in the iconic Liver Building by firing rockets at it. Then when they finally went home, this is what the ignorant horde left in their wake. 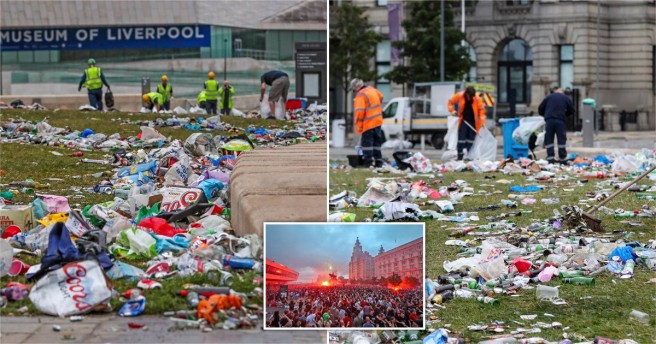 An impromptu Gay Pride event was staged on Clapham Common, in London. Attended by over 500 people, it was said to be peaceful and good-natured.
Until they went home, and it was discovered what they had left behind on this popular recreational green space. 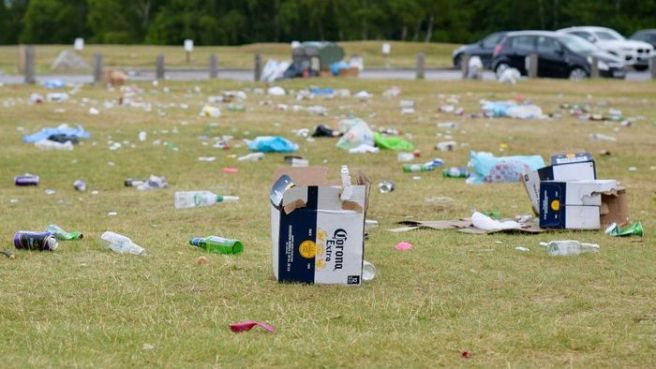 I am just beyond anger at this disgraceful behaviour. I don’t want to even be of the same nationality as the inconsiderate pigs doing things like this.

SHAME ON YOU! SHAME ON ALL OF YOU! 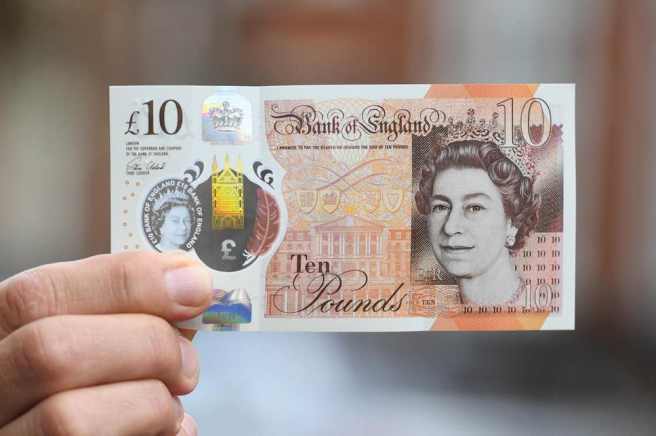 This country recently changed the size and composition of its currency. The old paper banknotes were replaced by ‘plastic’ money. These new notes are slippery, stick together, and cannot be folded. I didn’t like this new money from the start. It just didn’t feel right, and had a tendency to easily slide around. But then I don’t use a wallet, never have. I have always been someone who carried his cash in a trouser pocket. Wallets are easily stolen, especially when carried around in a back pocket, and when you live in a crowded city like London.

Since moving here, I have little need for cash. I can buy everything I need with a bank card, even tap the card against devices in shops to pay small amounts without having to enter a PIN number. For many of us, cash is almost obsolete now. You can even pay for something as small as a bus fare using a bank card.

However, I wanted to get some cash out yesterday, to give to Julie to take on a trip south this weekend. She is meeting a group of friends just outside London, and it is handy to have cash when it comes to splitting bills, or giving over her share of something, like an entrance fee. Outside the supermarket, I used a bank machine to draw out fifty pounds, and that sum was delivered in five ten-pound notes. Brand new plastic notes, all stuck together so firmly, they looked like just one. I made sure there were five of them, and carefully placed them into my trouser pocket before heading inside with my trolley to get the weekly shop.

I knew I would not have to go back into that pocket, as my bank card was in another one, and my car keys were clipped onto the trolley so I didn’t lose them. After getting the ‘big shop’, I had to go into town to sort out someone to come and investigate problems with the TV aerial. I was in the TV shop for just ten minutes, and didn’t have to go into my pockets for anything during that time. I then drove home, and unloaded the car.

Not long after that, I reached into my pocket to give Julie the fifty pounds.
It was gone, all of it.

A search ensued. All the shopping bags were examined. The car searched inside and out. My steps from the driveway to the house retraced, and my clothes examined in great detail.

Julie phoned the supermarket, in the hope that someone might have handed in the cash. They were very helpful, and said that the manager would instruct the cleaning staff to look for the money, once the store closed. If they found it, he would call us on the phone.

By 5 pm, I was so angry with myself for losing the money, I became frustrated and very dejected. I blamed the government for their stupid slippery plastic money, but I mostly blamed myself for being careless and forgetful. Fifty pounds is not a fortune, I know, but when you might just as well have thrown it down a drain, the loss of it is very annoying indeed. And when you are living on two work pensions and the State Pension, even that small amount is a loss that is noticed.

I managed to get to sleep eventually, and to forget about it. But when I woke up this morning, it was the first thing on my mind.

I fear it is going to ruin my whole week.

Since last week, I have been a bit fed up. That sort of edginess where everything starts to assume a real importance, and to begin to really get you down. Of course, the funeral for Julie’s Dad did not help matters, although it went off well, despite being a sad day for all concerned. Driving home last Friday, we hit appalling traffic, adding almost two hours to the normal three-hour journey, so I started the weekend feeling tired and low.

Then the weather turned again. Driving rain, sleet, hail, and a cold wind as well. Everywhere was dark and gloomy, and the ground was muddy, and covered in leaves. Taking Ollie for his walk was a real chore, although he didn’t even seem to notice the change. Then the clocks went back an hour, so we got up to what felt like a late start. This ridiculous, uniquely British tradition means that it now begins to get dark at 4pm, making the evenings seem long and dull.

I decided to do some ‘serious’ cleaning, and tackled the double oven. This is only a year old, but the fan assistance, and high running temperatures, seem to make it harder to clean than a ‘normal’ gas oven. As the doors drop down towards you, it is much more difficult to get right inside, to ensure a thorough job. The oven cleaner is like acid, and stripped the skin from two fingers with ease. (I know that you are supposed to wear gloves but I find them too cumbersome.) After two hours on the cooker, I did the rest of the kitchen, and felt stupidly tired afterwards, another sure sign of my advancing years. I then discovered that the cleaning fluid had somehow managed to get inside the seal of the glass doors, and I was left with white streaks between the two sheets of glass, impossible to remove. This made me angry and frustrated, far in excess of what should be expected for an ‘oven mishap’. A sure sign that the accumulation factor was kicking in.

Then the computer started to play up. Every time that it was shut down, it re-appeared with error messages, lost all my photos, and did not recognise me as the administrator. I have had to ‘system restore’ three times in two days. This made me acutely aware of my lack of technical prowess with computers, and electronic items generally. I would happily have thrown the whole thing out the window, then stamped on it for good measure. I still don’t know what the problem is, so have had to resort to standby only, without shutting down. No doubt I will eventually have to get someone in, to patiently point out my schoolboy error, for a large fee. Naturally, Julie wanted to do her Internet shopping for Christmas, so it came at the most inconvenient moment. (What doesn’t?)

The next day, Ollie’s eye seemed to be tearful again. After two operations, and a lot of distress, it seems that they may not have worked fully, so we will soon have to start that process all over again; contacting vets, claiming off the insurers, and making numerous trips to and from Newmarket, at 100 miles a time.

That is why the blog has been quiet. Not many readers recently, and not much input from me either.

I woke up to bright sun today, and have a lot to get done this week. The sun did not really improve my mood though, and I have little enthusiasm for anything, to be honest. Hence, ‘A few bad days’.