Thinking about my Mum this morning, and her distressingly hard departure from this life. The Liverpool Care Pathway mentioned in this post has since been discredited.

Too late for her, unfortunately.

During the last quarter of her life, my Mum was often ill. Her breathing problems became so bad, there would be crisis after crisis, occasions where she was not expected to survive. After recovering from these, she would usually say the same things, and have an identical conversation with me. She lamented the fact that voluntary euthanasia was illegal in the UK. She could see a future where she would not want to go on, but be unable to end her life with dignity, at a time of her own choosing. A vocal supporter of the ‘right to die’ campaign, she would always tell me that she did not want to, in her words, ‘end up as a cabbage’.  There were numerous times, when she would ask me to reassure her that I would advise any medical authorities that she was not to be resuscitated, and that her life was…

I have only just heard that Rutger Hauer has died, aged 75. That is a tragic loss to acting, and cinema.

I could write about all the film roles I have enjoyed seeing him in, but I have to pick my favourite, from my current top ten film of all time.

He embodied the essence of ‘Blade Runner’ (1987), as the replicant, Roy Batty. And he gave us one of the most iconic death scenes in the history of acting.

Rest in peace, Mr Hauer. You will be missed.

A rather sombre post from 2012, about my time as an EMT in London, with particular emphasis on dealing with death. Only one of you has left a comment in the past, and it has hardly ever been read. Given the content, I suppose that is understandable.

Living with the dead

This is not an anecdote about a specific job, like the other posts in this series. It is rather a reflection on death, and on dealing with it in the role of an ambulanceman. It is not meant to be depressing, though it may read that way. It is part of my reflection on those years, as I get older.

Before I joined the London Ambulance Service, I had seen one dead body. When I was young, my maternal grandfather died. He was only 65, and died suddenly. I was taken to see him in his coffin, which was in my grandparents’ front room, for a vigil before the funeral. My enduring memory of that night, was not of my first dead body, but of my uncle crying. My grand-dad just looked as if he was asleep, and I did not find it distressing.

Another post from 2012, reflecting on my time as an EMT in London. I don’t think any of you have ever seen this one.

Phone calls in the night

Some jobs in the Ambulance Service do not involve rushing off on blue lights, heading for the local Casualty department, trying hard to save the life of the patient on board. They do not involve any contact with the patient at all, save for a brief confirmation that nothing can be done.

Most people who die from natural causes, do so in the early hours of the morning. They are sometimes discovered later, often much later, but the chances are, that they actually passed away after midnight, and before 6am. Of course, the Ambulance Service is a 24 hours a day operation, so if the unfortunate person is found, an ambulance will usually be summoned to the scene. The deceased person may have been found by a carer, if in an old people’s home, or possibly by a neighbour, who might have a key, and…

One of the most depressing aspects of getting older is the loss of family members to illness or old age. I was quite young when my maternal grandfather died, but remember it well. It was an introduction to the loss of older relatives that prepared me for many more that came later.

However, I don’t think I was ever prepared for the loss of so many friends. For some reason, I grew up thinking that my close friends would be around for as long as I was, and their unexpected loss came as a harder blow than that of very elderly relatives who had lived long lives.

But you forget you are getting to an age where friends begin to pass away too. It just creeps up on you, but never gets any easier to deal with.

Last week, I was informed of the death of another close friend. Someone I had known since I was 28 years old, so almost forty years of friendship. As I received the text message from his wife, I was struck by the fact that I was holding the last letter he had sent me, preparing to reply to it that morning.

I met James Cassidy on my first day at the London Ambulance Training School. He was an experienced Paramedic who had chosen to become a training officer. As our large group of new entrants sat nervously eyeing each other in a big classroom, he walked in to introduce himself as our class instructor. Within minutes, his easy manner had relaxed everyone. He joked and laughed with us as if he had always known us, and when we went for a tea break, we all agreed that we were lucky to have got such a character to guide us through the long weeks of training to come. We also concluded that any job that could produce such a man must indeed be a good choice of career.

The next weeks of training showed his caring and commonsense nature to the full. He helped those who found it hard going, and continued to encourage us, as well as never sugar-coating the harsh realities of the job we would soon be doing. On completion of the classroom training, he became my personal instructor for the on-road, real life training. Six weeks of 999 calls, in one of the busiest ambulance stations in central London. Non-stop emergencies of all kinds, with very few days off.

During that time, Jim and I became firm friends. In between jobs, we would have long debates about politics, life experience, travel, literature, and the pros and cons of life in the emergency services. But once my training was over, I moved on to my permanent posting, and Jim went back to take on his next class of new entrants. But we didn’t let that distance stop us keeping in touch, and began many years of correspondence by letter, something that endured even after emails had become the norm. I only bumped into him occasionally over the years, sometimes at headquarters, or at retirement celebrations. But we kept in touch as frequently as our busy lives allowed.

Many years later, Jim left his training role, for promotion to Divisional Officer, in east London. Despite his elevation in rank, we stayed in contact just the same, right up until the time I was due to leave London for good, and retire to Norfolk. Jim and his wife came to my leaving party in 2012, and he promised to visit me in East Anglia. And he kept that promise. When he retired and bought a motor caravan, he arranged to bring it to a site close to Beetley, and we spent two marvellous days catching up. In his last letter to me, he mentioned that he would be coming to visit again, this time with his wife, and hopefully in the summer of 2019.

But that was sadly never to be, and his unexpected death last week came as a great shock indeed.

So rest in peace, my friend Jim. A great bloke, a true and loyal companion through most of my life, and never forgotten.

An old post from 2014, something very personal. Other than Jude, I don’t think most of you have ever seen it. (I just remembered that it was reblogged on Sally’s site, in 2017. Apologies for the repetition!)

When you see someone splashing in the water, they may not be waving, but drowning.

I would like to thank Jaypot, for suggesting that I explore my childhood for inspiration. Here is the first result of that exploration.

Stevie Smith wrote this famous poem, in 1957. If you have never heard of it, here is a link; http://www.poemhunter.com/poem/not-waving-but-drowning/
I did not become aware of this poem until the 1970’s, and considered it to be a fine piece of work. More than that, it had a connection for me, that even now, is painful to recall. I must start by saying, by way of a disclaimer, that many of the events recounted in this post were told to me later, by my parents. (Though despite my youth at the time, I do actually remember the main occurrence, as if it happened yesterday). This also applies to the exact geography of the location, a place I have never visited since, and which may well have changed, over… 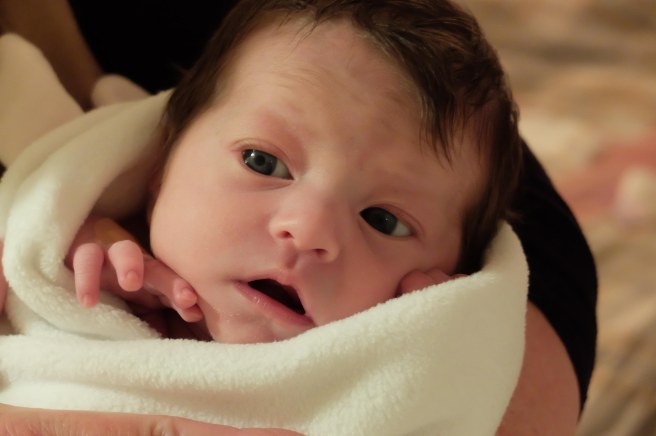 It has been a good few years since we had a new baby in my maternal family. I was delighted to go and visit the latest arrival, Violet, last weekend. She was delivered by C-section, and I am pleased to report that Mum and baby are both doing really well.

The added joy of seeing the new baby was that she is named after my mother, Violet, and also my grandmother, Rose. As I have never had children, it made me feel very happy to know that my own mother’s name will live on in this new addition to our family, and I know that my Mum would have been touched beyond belief.

Then this morning, along came the sadness. Violet’s great-grandfather, and my last surviving uncle, passed away after a long illness, at the age of 87. He never got a chance to see Violet before he died, but at least he heard about her being born, and had seen a photo.

The circle of life continues.