Blogger Christoph Fischer is also a prolific writer, and many of his novels have been published. I have had two of his books waiting on my Kindle for a long time now, and finally got to read this one over the past few days. Here is a short bio of Christoph. 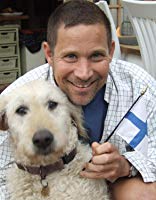 Christoph Fischer was born in Germany, near the Austrian border, as the son of a Sudeten-German father and a Bavarian mother. Not a full local in the eyes and ears of his peers he developed an ambiguous sense of belonging and home in Bavaria. He moved to Hamburg in pursuit of his studies and to lead a life of literary indulgence. After a few years he moved on to the UK where he now lives in a small town in West Wales. He and his partner have three Labradoodles to complete their family. Christoph worked for the British Film Institute, in Libraries, Museums and for an airline. ‘The Luck of The Weissensteiners’ was published in November 2012; ‘Sebastian’ in May 2013 and ‘The Black Eagle Inn’ in October 2013 – which completes his ‘Three Nations Trilogy’. “Time to Let Go”, his first contemporary work was published in May 2014, and “Conditions”, another contemporary novel, in October 2014. The sequel “Conditioned” was published in October 2015. His medical thriller “The Healer” was released in January 2015 and his second thriller “The Gamblers” in June 2015. He published two more historical novels “In Search of a Revolution” in March 2015 and “Ludwika” in December 2015.

And this is my five-star review, posted on Amazon UK.

This novel is set in a familiar time period, but in locations unfamiliar to many, and rarely featured in literature. Two friends in Denmark are inseparable, despite holding completely opposite political views. Close to the end of WW1, one of them decides to leave the country, and he volunteers to fight for the Reds, in the Finnish Civil War of 1918. Whilst there, he meets a nurse, and forms a relationship with her.
Meanwhile, his friend back in Denmark is espousing the views of the other side in politics, the burgeoning far-right. He is forced to leave Denmark, and flees to join his friend in Finland, with his arrival turning the relationship into an unusual love triangle.
This story has huge scope, reminiscent (to me at least) of novels like ‘Doctor Zhivago’, and the ‘Don’ books of Sholokhov. We follow the characters from 1918, right through to 1948, during the time of The Winter War between Finland and the USSR, into WW2, and collaboration with Nazi Germany. Historical detail is first-rate, and the changes in the main characters are well-described too. It’s all there for us. The social structure of Finland and Denmark, the turbulent politics of that thirty-year period, and the short but intense military actions experienced during three periods of conflict. And importantly, characters that I cared about and wanted to follow.
I am looking forward to reading many more of Fischer’s books.

As you can see from that review, I liked this book a lot. I also enjoyed the ‘traditional’ writing style, and construction of the novel. The book is divided into parts, and we follow certain characters in each time period, with chapters focusing on one or the other. No gimmicks, no style excesses, and what boils down to a good old-fashioned read. The historical setting may not be for everyone, but I assure you that this rarely-covered area of conflict is fascinating, and seeing political ideals tested to the breaking point as the whole world descends into all-out war gives the reader much to think about.

We also get a window into the lives of people of all classes at the time, from poorly paid labourers living in cramped conditions, to the dismissive wealthy changing sides and allegiances to secure their fortunes. But the book is also about close relationships. Those between parents and children, often stilted by the demands of a rigid society, and those of close male friends, disrupted by the arrival of a determined woman. Something for everyone, in just under 300 pages.

I read the Kindle edition of this book, and here are some links for you to see more about Christoph and his other books, and to buy the novel, if you should choose to do so.