I am very pleased to present a guest post from my blogging friend, Jon Risdon. He is an actor, author, and blogger who resides near the lovely seaside town of Whitby, in north-east England. https://wilfredbooks.wordpress.com/

Wilfred Books was set up at the end of 2013, primarily to publish Black Shirt and Smoking Beagles, the biography of Wilfred Risdon, my grand uncle (that is: my grandfather’s brother), whom I never met, I regret to say. I discovered him in the course of my family history research, and the more I found out about him, the more interested I became in his life & work, so I thought there might be at least a few other people out there who would share my interest in him enough to also want to read his fascinating life-story. For what seemed, to me, to be very sound reasons, namely: he was not a household name; he was involved in contentious politics and activism for most of his adult life; it would probably be a strenuous & stressful (and, probably, ultimately futile) task to find an agent and/or publisher to take an interest; I decided to bite the bullet and publish the book myself. To market the book I set up the Wilfred Books website, which accepts payments securely, using PayPal, so no personal details are registered on the site, and I also created a WordPress blog, to promote the website, but also to write about subjects which might have interested my relative.

As related above, the first book published under the imprint of Wilfred Books was Black Shirt and Smoking Beagles, and it is still available as a print version (product code WB01), but also downloadable versions: PDF (product code WB02), ePub (product code WB03) and Kindle versions (product code WB04), in both popular formats (.mobi & .azw3); the ePub version can be read using iBooks on iOS devices, and on a wide range of other platforms; the Kindle version required can be selected from the link in the email confirming the purchase. In the future, I might also publish other books, either about Wilfred Risdon, or subjects related to his life and work, especially his animal welfare concerns; or any other subject/genre which I think is appropriate: check the New Items section on the About page on the website from time to time, for additions to the catalogue.

On that note, in 1967, Wilfred Risdon wrote & published a biography of a man whom he held in high esteem, and for whom he had great respect, the Edinburgh surgeon Robert Lawson Tait and, as it is now out of print, Wilfred Books is pleased to be able to offer a PDF download facsimile version, with the catalogue code WB05, of the original publication, with a preface to the new edition by J. L. Risdon. The book is called Lawson Tait: A Biographical Study and, given Wilfred Risdon’s close association with the National Anti-Vivisection Society, Wilfred Books will donate 10% of the annual net profit, over a minimum amount, from the sales of this edition to Animal Defenders International (ADI), the successor to the previous organisation. If there is sufficient interest, it might be possible to consider making it available in the other download formats, or as a print edition: please email me to register your interest. I look forward to hearing from you!
Jon Risdon jrisdon17@googlemail.com

I hope you will visit Jon’s blog and see what he has to offer.

I am very pleased to help to promote the book of one of our community bloggers, Jon Risdon. It is a biography of his great-uncle, Wilfred Risdon. 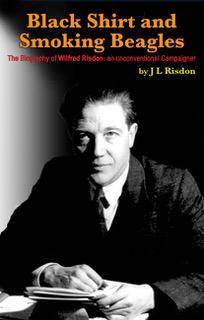 Here is Jon’s information about the book.

Black Shirt and Smoking Beagles is the biography of my grand uncle, Wilfred Risdon, who reached the pinnacle of his career as Secretary of the National Anti-Vivisection Society in London, England. He had worked tirelessly to educate people of the fallacious and unnecessary nature of animal experimentation since just before the second world war, using his well-honed talents as a political organiser, a career that was interrupted in 1940 by his incarceration for three months under the hastily-enacted and politically motivated Defence Regulation 18B, a blunt instrument intended to prevent potential ‘fifth columnists’ presenting a danger to an embattled country apparently facing invasion by bloodthirsty Nazi hordes. Despite his close association with Sir Oswald Mosley, which began as far back as 1924, he was a lifelong socialist, but because he was also a deeply religious patriot, he saw no conflict in also supporting a nationalist cause. This book describes Wilfred Risdon’s life & career with a wealth of supporting reference material, and examines a political ethos that all too often is simply whitewashed out of existence or brushed under the carpet: the fundamental underlying economic imperative is especially important today.

This is a link to where you can buy the book.
(Please note, that this is a safe site, despite browser warnings you may see)
http://www.wilfredbooks.co.uk/buy1.html?LMCL=HKHf3g

If you don’t think this is your kind of book, then why not visit Jon’s main blog, and show him some encouragement.
Here’s a link to that.
https://wilfredbooks.wordpress.com/

Jon is a writer and blogger living in Britain. He blogs under the name Wilfred Books, and his site can be found via this link.
https://wilfredbooks.wordpress.com

PATIENCE IS A VIRTUE (Allegedly)

Welcome to the new Wilfred Books blog. After much prevarication, I finally accepted that, as a publisher who is trying to establish some sort of presence in “the global market-place”, it was about time that the company had a blog, as well as a website , essential of course, because that’s where I sell the books, and the social media pages (Facebook and Google+: I don’t do Twitter) so here I am, at last! It’s only fair to say that I also waited until I had more than one solitary book to sell, because that didn’t make me a publisher, but rather, an author trying to sell a book I’ve published (Black Shirt and Smoking Beagles)! I will return to this point later.

I thought, in my naïveté, that it would be the proverbial ‘five-minute job’ to make a new blog: wrong! Possibly it is simply the usual problem of unfamiliarity with a particular user interface for a specific application, but my frustration is partly the result of having created a blog on my personal website, which was the culmination of a very long & tortuous development process, mainly thanks to my relative inexperience as a coder; I now feel reasonably happy with it, even though I would also be the first to admit that it is by no means perfect (and, whilst I could very easily lists its shortcomings, I think I’d rather lyrically accentuate the positive!).

On the whole, I think I’m glad that I didn’t check out other blogs before I designed my own, because I think it would have influenced my conception of the appearance, whereas I approached the task as a design project, which meant that I could make it look exactly as I wanted it to, rather than having to conform to another application’s parameters. When it came to a blog for Wilfred Books however, I thought it would make more sense to use a templated blog, specifically to save time; one of the major drawbacks with my personal blog is that it isn’t responsive (adjusts to different screen sizes: it only works with screens no smaller than a landscape oriented tablet), whereas I knew it was imperative, given today’s peripatetic lifestyle, that the Wilfred Books site was responsive, which it is, even if the graphic design standard is basic!

In the end, I settled on this one; previously, I had what was probably a totally irrational aversion to WordPress, perhaps because of its ubiquity (I confess to being an unashamed nonconformist), but I am reliably informed that the platform is well known and generally liked for its efficacy. Hence, I can now compile & publish a new blog post in a recognisable and responsive form fairly quickly, which means, given that the delightfully-named ‘back-end’ processes (order processing, etc.) on the Wilfred Books site are working effectively, I can concentrate on developing the publishing aspect of the company.

That’s where you, dear reader, come in: do you have a book that you are desperate to publish, but don’t know how to go about it? My preference is non-fiction books, the favourite genres being auto/biography or interesting/unusual family history, but I will consider other genres if they have merit, of course (although I think romantic fiction might be at the bottom of the list!), so if you would like me to consider your magnum opus, leave your email address in a comment, and I will get back to you! Also, please feel free to comment on the style of the blog: I deliberately kept it quite plain, so let me know if you like it, or if you think it could do with ‘jazzing up’ a bit. Thanks!

You might like to read Jon’s thoughts about the writing process, and getting books published. Please let him feel a part of this great community.