The Usual Muttwits site may well feature your very own canine pal on their ‘Most Wanted’ page!
Dogs tails from Westley Piddle
Just follow the instructions below, and your favourite doggy pal may well become a blogging star!

Who likes Muttwits? You do, of course – but wouldn’t it be great if you could see your very own muttwit on Muttwits.com?

Introducing the Usual Muttwits Most Wanted page of all your furry besties!

Simply trot over to the Usual Muttwits Facebook page, or go direct to Muttwits.com and upload a sharply-focused Muttshot of your sharp-looking doggy (together with name, age and breed, plus a few words on personality) and we’ll share on our new sub-page.

Every month Zozo will choose a few Muttshots and draw them. Some may even trot into upcoming stories…

I am reblogging this from Rich’s site for the interest of all my American readers. You might like to know that your servicemen who died in Britain in WW2 are not forgotten, and they are honoured and respected by this country. Just like this brave man.

The memorial you can see below is just a few hundred metres from where I grew up. Although it’s close to junction 14 of the M6 there are beautiful farm fields, spinneys and streams nearby. I ran and hid and splashed in these fields, punctured tyres, suffered nettle rashes, all the usual.

What I didn’t know was that on 4 July 1944 a Mustang P-51D had crashed into a wheat-field here, close to Home Farm and the brilliantly named Sleeper’s Spinney.

USAAF pilot Captain Perrin – an ‘ace’ fighter who had shot down five German aircraft – was delivering the Mustang to Cambridgeshire when something went wrong and the plane was seen to catch fire. Heroically Capt. Perrin did not eject and stayed at his controls to avoid crashing into the populated North End of Stafford, avoiding schools, houses and a hospital.

Sadly, the New Jersey-born pilot died in the… 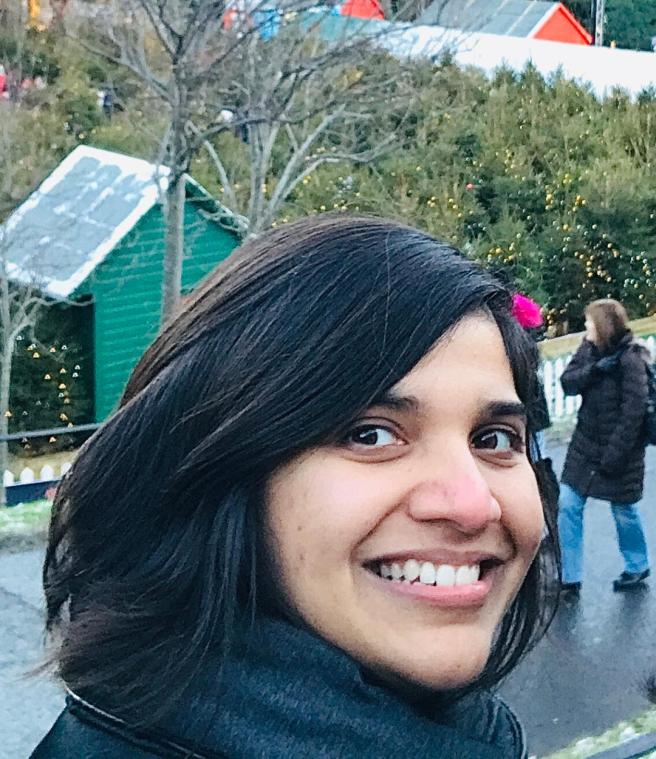 Here is her own short bio.

Hello, I am Megha. I come from India and I’ve been living in the Netherlands since last four years. I am 31 – not too old, energetic and optimistic. Reading, writing and Travelling are my top three likes. So far, I’ve travelled across 23 countries and I aim to reach the 50 mark by the time I am 35 years old. By profession, I am risk Consultant but by heart I am a writer. I’ve been writing (old style) since last seven years but have only published a blog this year. My blog (link at the bottom) is my collection of experiences and opinions about life & things & places & people.
In this post, I share my experience of visiting Auschwitz. Even if you haven’t heard of Auschwitz, I’m sure you would see it (& know it), through my eyes as you read this.

If you haven’t heard of Auschwitz, Imagine a slaughter house (not for animals, but for humans). Imagine a place where millions of Jews were confined for years, tortured to death by hard labour, thirst, extreme hunger and suffocation. The reason for death being- neither Crime nor War but the belief in a superior race. Imagine how humans could be responsible for more than a million deaths in a place this small. (in the name of saving humanity from other humans – Jews). Auschwitz is not old history but very much a part of recent century. Nazi Germany master minded this extermination camp (and many others) during world war ii with the sole aim of systematically eradicating the race of Jews.
So last year, when I planned my visit to Auschwitz, it was not unusual for people to ask why I would choose to go there? Wouldn’t it be depressing? In my defence, not visiting this place, merely excuses us from reality, hoping we forget it someday. There is No history book that can convey the happenings of this place to a degree that it instils your memory.
Somewhere inside Auschwitz, I found this quote that sums up the reason why people need to see this place.

I cannot deny the fact that this place is downright melancholy. You would be standing in the site of holocaust witnessing Exhibits of the dead (millions) piled on top of one another. It has a room full of belongings that were stripped off from the inmates before they entered the camp. A room full of gas canisters that were used to suffocate them to death. A room full of human hair that were shaved off from their dead bodies before being burned by the Nazis.
A guide will take you around the camp and tell you how a typical day looked like for these prisoners. You will see the laboratory that was used to experiment on prisoners, inducing them with deadly diseases. You will see the kitchen that has some paintings that the prisoners drew to keep themselves hopeful. You will also see the punishment cells, gas chambers, the shooting wall and a room fitted with body sized ovens. If this does not melt your heart, a thousand photo frames mounted in a large corridor showing the victims, their age and survival span in the camp, definitely would.
By the end of this visit, you are loaded emotionally. Some cry, some hold back tears. Some ponder how humans could be capable of this act. How could some still hope to live in this situation. How strong were the people who survived the camp? Does the trauma impact their free lives later on?
This wasn’t over for me yet. I was feeling restless. A visit to Auschwitz raised some very fundamental questions about human nature, survival and our relative mental strengths. I slept on these questions for days following. Later, I learned about an Auschwitz survivor, a psychologist – Viktor Frankl. Viktor was one of the fortunate ones to have survived this place. He says, “Those who have a ‘why’ to live, can bear with almost any how “. For Viktor, the why was a hope to finish his book about logotherapy. He wrote this book after he was released from the camp. What was supposed to be psychology theory, turned out to be a truly personal account of his survival in Auschwitz detailing how the camp impacted the inmates psychologically, why some survived while others didn’t.

His book “Man’s search for meaning” was published in 1946 and became an instant bestseller. I read it a month after my visit and regard this as a closure to my quest for Auschwitz.
P.S – The photo at the top, shows the gate of Auschwitz inscripted as ARBEIT MACHT FREI” meaning work makes you free.
Paradoxically, It was death that made these inmates free.

Here is a link to Megha’s blog.
https://myhandwrites.com/

Please visit her blog to see what else she is writing about, and welcome this new blogger to our great community.

The last of the four posts about the historic town of Sandwich, from 2015. The photos do benefit from enlarging them, as you can see fine detail. This reblog may be of interest to my more recent followers.

The third part of this photo post about the historic Kent town, from 2015. Despite the title, and what it says in the text, I did post a fourth one, and that will be up tomorrow. This is for new followers who haven’t seen it before.

The photos look a bit better when enlarged.

This is the last selection of photos from our trip to this lovely old town. On this occasion, I have included three photos of more modern buildings in the town. Given the great age of most of the houses and public buildings there, the term ‘modern, is used advisedly.

From 1916 until 1928, The East Kent Road Car Company operated buses in and around the town. They provided a service to the nearby city of Canterbury, and to coastal towns such as Ramsgate, and Deal. This quaint little building served as both the ticket office, and public waiting room, and has been left in its original place, though somewhat abandoned to nature.

The wonderful Art Deco edifice of the Empire Cinema has stood since 1937. At night, it is still illuminated by the original green neon strip-lights outside. The cinema continues to operate to this day, showing mainstream films, as…

The second reblogged photo post featuring this town in Kent, from 2015. Many of you saw these at the time, but they may interest more recent followers. It continued to be dull weather all day there, so it is probably worth enlarging the photos to get a better effect. (This can be done on the original post)

Continuing from the previous post, here are three more shots from that day trip. Some of the oldest buildings in the town, and a view from the bridge along the quay, which now serves as a car park.

St Peter’s Street, with its lovingly-preserved mixture of houses, from Tudor to Georgian. 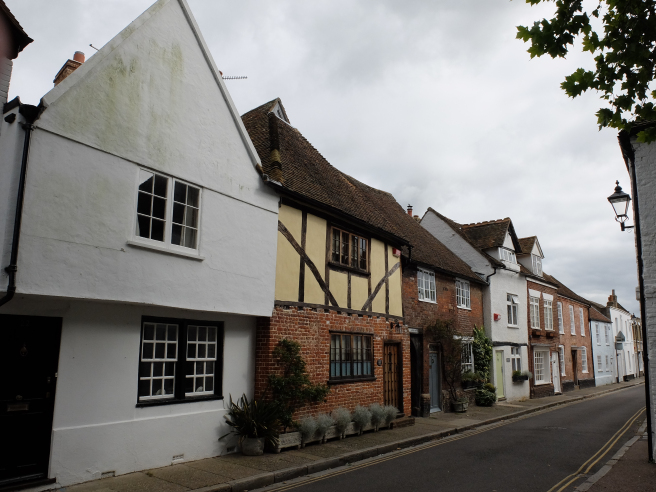 St Peter’s Church, in the heart of the town. It dates from the 13th century, and has a famous crypt, once used as a charnel house and ossuary. There is also the distinctive metal cupola below the spire. It is hard to see from this angle, but if you enlarge the photo, it is visible. I wanted to go inside, but a large tour group had just arrived, for a pre-arranged visit.

Standing on the new bridge that replaced the ancient toll bridge, this was shot looking east along the river, toward the sea.

In the next and last…

More photo-post reblogs for new followers, from 2015. This is the first of four posts about the historic town of Sandwich, in Kent. The day was unbelievably dull, so the photos look flat and uninteresting. They are marginally better if you enlarge them. Worth posting though I think, as the small town is overflowing with history. More to come this week, with all four parts reblogged.

Sandwich is a town in Kent, on the River Stour, one of four English rivers bearing this name. It is close to the channel coast, lying south of Ramsgate, and east of Canterbury. It has been established as a town since Roman times, and was once a busy port. It was one of the original Cinque Ports, providing men and ships for the navy, in exchange for lenient trade laws, and low taxes. At the time of Edward The Confessor (1042-1066) they formed the first real navy organised for the defence of England.

The town still has a connection with the sea, and is popular with boat-owners, and those taking trips along The Stour. It has become something of a tourist trap, thanks mainly to its historical connections, the proximity to Canterbury, and the variety of well-preserved old buildings to be found there. Julie and I visited last year, and…