Here is his short bio, followed by his guest post. Please visit his blog to see more about his life and thoughts.

Hi,
I am Narayanan, a publishing professional with deep interest in philosophy, comparative religion and political thought. I work on topics that present an opportunity to evaluate issues critically and offer an alternative view point.

A pillion ride with the pizza delivery boy 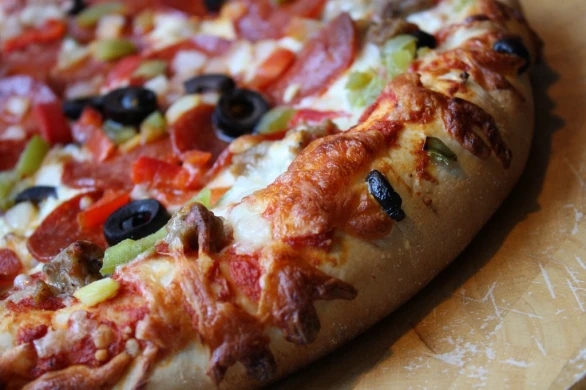 Any time is pizza time.

Having spent 20 unsuccessful minutes waiting to hire an auto, I grudgingly decided to walk the three kilometre route back home from the vaccination centre. Since employing the jazzed arm muscle immediately after a Covid preventive shot may not be a great idea, I left the car at home, got myself dropped at the centre by a considerate neighbour and happily joined the expanding tribe of the fully inoculated before I was stranded on the roadside desperately looking for a transport back. Just as I made a few hesitant strides, a bike from behind stopped aside and the youngster, lifting the glass shield of his headgear, asked me “ Sir, can I drop you somewhere?”. With the logo of the company prominently on display on his T-shirt and a bulged backpack firmly secured on him, I knew that he was a pizza delivery boy zipping through to make the next delivery of the delicacy and satiate the pangs of hunger of a starving soul. Since his immediate call of destination fell close to the place of my residence, I happily accepted the offer and squeezed myself on the bike, with the backpack sandwiched between the two of us. “Make yourself comfortable Sir” said the compassionate boy as he moved himself forward, almost sitting on the fuel tank, to create a little more space to accommodate my large body and soon we were on wheels!

Though the posture of my sitting was anything but comfortable, the spicy aroma emanating from the hot pizzas inside was so invigorating that I soon began to enjoy the ride, clasping the bag with my two hands and taking in the warmth of the stuff. “It should be farmhouse pizza that is selling most in this monsoon season” I made an informed guess to the boy based on the cocktail of smells of crispy capsicums and fresh tomatoes that was filling my nostrils along with the flavour of that baked oregano. “ Yes sir that is always the favourite but the Mexican and the Tandoori Paneer are also in great demand”. “ Oh that would mean that the business is brisk… so how many pizzas you usually deliver in a day” I continued the conversation with my probing questions and the boy was more than willing to indulge. “ Around 15 to 20 sir and after putting in twelve long hours of work, my earning is just about Rs. 400- 500 a day. I get Rs.25 per delivery” there was a tinge of lament in his voice as he said this adding “and the petrol expenses is all on me”. “ But I am sure customers would be tipping you handsomely when you deliver these hot pizzas at their doorsteps”. “ Nothing much sir and maybe an occasional ten or twenty rupees. In these difficult times, not many are willing to shell out anything extra and some even ask back for the exact change after deducting the amount” . “ Is that so…that’s very mean” I sympathised with the boy as he continued “ The other day, one customer held back my bag till I returned the excess two rupees fifty paise that wasn’t readily available with me. Some even cancel the order if I am late by a few minutes and I will be made to pay a penalty for that”. “ Oh life is tough” I agreed with him as I struggled to balance myself as he negotiated a deep pot hole in the middle of the road to avoid splashing from the muddy rain water puddle.

“ Riding in these roads constantly is laden with much risk and how are you protected? Do you have a medical claim or an insurance policy?” I turned concerned and animated now as I became aware of his daily professional hazards. “ Insurance? We don’t have anything of that sort and if some mishap were to happen, the responsibility is entirely on to me. I am doing this job only for my survival” the helplessness of the boy was too evident to ignore. “ How long have you been doing this?” I pressed him for an answer presuming that he would be new to the job. “ Almost two years now, joined just before the pandemic struck. I really wanted to change but as most of the factories are in bad shape, no company is taking any new staff now.”

“You speak so very well and I am sure you would be a matriculation pass” I prompted him to reveal his educational background not very sure whether he would have achieved that significant academic milestone that I just mentioned. “ Sir, I am a science graduate and studied physics and mathematics as my subjects. I will share my certificate with you on WhatsApp” he stopped the vehicle as he said this, having reached our common destination. Never before was so much revelation squeezed in a three kilometer ride, of ordinary people we meet everyday but know very little about…and in five minutes!

As I got down from the bike with some assistance from the boy, I thanked him profusely for his timely help. “ No problem sir” was his disarming reply as I shared my mobile number for him to send me the image of his degree certificate. “ That’s my degree certificate. Please help me get a decent job” requested the boy on hearing the peep of the WhatsApp message alert on my mobile. “ Sure, I will definitely try” was all I could muster to utter looking at the genuineness of his academic achievements!

“Thank you sir” said the boy in all smiles displaying in the process the whole array of his white teeth that resembled a lavish dose of mozzarella on a cheese burst pizza!